So on Friday night we were off to London to see The Foo Fighters- Andy had got me tickets for my birthday. Before that I had one of the most stressful journeys driving home- mainly traffic at a standstill everywhere I turned, and then a dramatic bit: I got overtaken by a car driving at a mental speed along a narrow country lane, and then a split second later three police 4×4’s went passed with their sirens on (I just thought they were pulling the car over for dangerous driving)- the car didn’t pull over and they zoomed off into the distance, closely followed by three more police cars, and then one more. There was a helicopter circling overhead, and when I arrived in the village there were cars all over the road and the route I needed was closed (I think some cars had crashed- one had a wing mirror missing) so I took yet another diversion, and then got stuck in some roadworks (turned out it was armed police chasing a car all the way from Luton). My journey which is 35 mins on a good day and 45 mins on a bad day was around 85 mins- argh! Andy had been in London for 3 days so as soon as I got home I had to get back in the car and pick him up from the station- his trains had been bad that day too, and the way we were going to go was out of bounds as there were no trains running any more, so we had to leave asap, drive to Cheshunt and get the overground in. We made it to the stadium (the Olympic park) with 10 mins to spare! 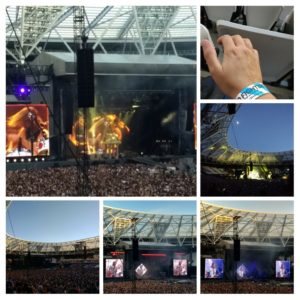 What can I say? They were awesome! It was a totally rocking night, Dave Grohl was on top form, leaping about the stage, running up the catwalk style thing into the crowd, screaming into the mic. At one point the drumkit was raised on vertical pedestals, and Taylor Hawkins did the most immense drum solo (when we last saw them at Brixton Academy, they had two drum kits and did a sort of drum-off battle). To showcase each band member they played little sections of songs, even singing some of Grease Lightning to showcase the bass- something I never thought I’d see. Taylor Hawkins did a mean Freddie Mercury impression (the call and response bit- see this video for what I mean) (he was wearing the same swim trunks on Friday!) and then the two of them swapped places and sang Under Pressure (my fave Queen song), with Taylor Hawkins doing the Freddie Mercury bit and Dave Grohl doing the David Bowie bit and the drumming. Totally amazing. There was lots of Dave Grohl playing the crowd, and lots of f-bombs. At one point I mentioned to Andy that this was the total opposite of our last gig (Gomez- they are super chilled out)- he said back to me “Whippin’ Picadilly Mother F**ers”- this was the style from the Foos! A proper stadium rock show anyway.

It finished with fireworks as they played Everlong- just fantastic. When it finished we had 13 mins to get the next train (or a long wait for the next one) so we ran, dodging the crowds, getting on the train with 30 seconds to spare! 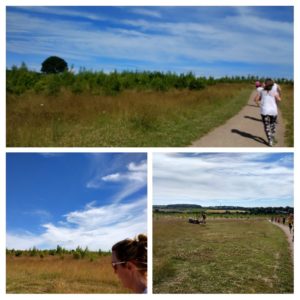 A late night on Friday meant I was glad of a local parkrun on Saturday morning. Dad was off out later in the morning so we met at Heartwood Forest- he can cycle there from home. I left it a little late (also, saw the fox cub in my garden at 8.30 right before I left) and could not find parking right away, so only just made the meeting place with 5 mins to spare, but as the actual start is a little walk from the meeting place and finish area, they usually begin a little late so I was fine. Herts were celebrating This Girl Can by having women as RD’s for all the parkruns that day, and they asked all the girls to step forwards at the start for a photo. Most men didn’t mind, but there were one or two who did not want to give up their starting position (even though everyone moved back after the photo…).

Heartwood Forest is nearly two laps- you start half way up a hill, run to the top for gorgeous views of the countryside, down to the finish area, and then do a complete lap (with the hill being longer)- I ran with Dad for the first lap but he mentioned to me that he wanted to push the pace for the second lap as he hadn’t done much exercise this week, and that was fine with me as I was tired. It’s amazing how fast he ends up going- he finished in 25:36 and I came in at 28:56, so he was way ahead in the end considering we ran the first 3k ish together. I did walk on the long hill for a bit and used the time to take a few photos (the ones above). 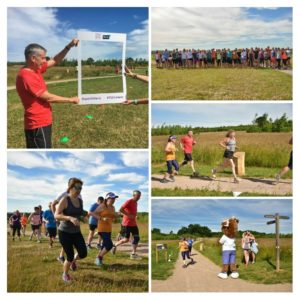 After I finished the RD was trying to hold up the big This Girl Can frame and take photos through it, so I offered to hold it for her, and then as it was still wobbly Dad held the other side. She managed to get a few snaps of runners coming towards the finish line. 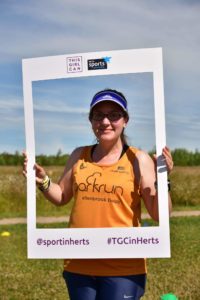 They then asked to take a pic of me too- I felt all sweaty and hot but actually it looks OK (and bonus, I’ve kept my eyes open which is a Very Hard Thing for me in photos).

I mentioned the other day that I had been feeling unusually tired, and the lovely CT (check out her blog if you like to read about running with a dog combined with lots of amazing nature photos) commented that I could possibly have a virus. There have been a few going around at work, including slapped cheek, and when I actually looked at the symptoms, I think it could have been something like that, as I had a headache for several days (putting that down to be tired) and I have a rash on my arms but put it down to heat rash. Anyway, other than the late night on Friday, the weekend was a chilled affair. I watched a bit of TV while I had my breakfast, then pottered around a bit. 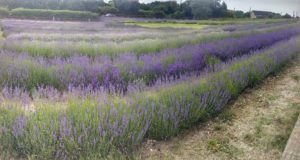 We then headed off to the Hitchin lavender farm- the main fields weren’t quite all purple yet, and we got there fairly late in the afternoon, so we just had a look at the display fields and then went to the cafe. 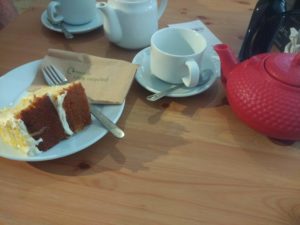 I had a lovely pot of rooibos tea  with lavender and bergamot, and we shared some lemon cake. We were spoilt for choice over the cakes though- beetroot chocolate cake looked good, as did the honey and lavender cake. I bought a couple of little lavender plants to put in an empty pot, and so when we got home and it was cooler I did a little bit of weeding and planted out the lavender. 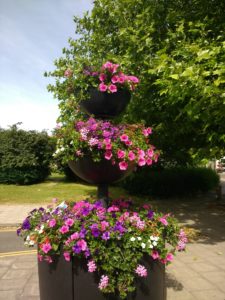 On Sunday morning I had a slow and steady 10k run (no walking, but a very slow pace overall), sat in the garden and read a magazine while my hair started to dry, watched the football and then walked into town to get my free Vitality Starbucks (and some vitamins). We’re off to the cinema in a bit to see Ocean’s 8 which I am looking forward to- hopefully good fun and nothing too taxing.

I hope you had a good weekend?