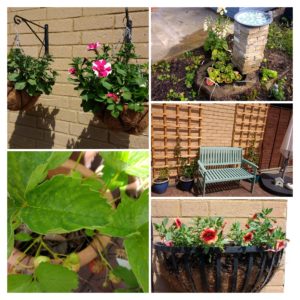 Photo not actually of where we have yoga outside, but just to illustrate this in case you have forgotten what outside may look like…

For the last couple of weeks we have headed outside towards the end of our yoga sessions. The yoga I go to is from 7.45-9pm (well, more like 9.15) and so it’s only been light enough to do this recently. The little room which we use overlooks a secluded communal garden area, which is gorgeously decorated with fairy lights. After the normal past of the session (warm up, whatever bends/ twists we are working on) we then took our mats into the garden onto the grass. The first time we did this, we practised handstands. Now, I could never do a handstand as a child, but they are sort of launched into (you remember, people would stand up, then all in one move throw their hands on the ground and jump their feet up). For yoga, you begin with your hands on the floor and jump your feet up. We did it in pairs, with the partner standing up ready to steady you by holding your hips. The person I was paired with used to be a gymnast, so she was pretty strong and very steady. However, I was not. Although I did get the furthest I have ever got with it. I think I am partly very nervous about it, but also my shoulders are not very strong, so once I get upside-down my arms collapse. But in the week I have been trying to do some press ups to work on strengthening my arms, and I think it’s been helping. This time I almost managed it- eg I was being held for a split second by my hips before I came down. I was tired by this point as I’d been practising the jumps for a bit, which is draining on the arms.

Then last week we again did the warm up inside and then took our mats outside. This time one of the inversions we practised was the headstand. I can’t do the normal headstand at all as I just can’t get my legs close enough to my body to be stable before my legs go up, but I can partially do the tripod headstand. (If you click on that link, I can do the bit where you rest your arms on your knees, but I’ve never got further on my own). Last week I managed to get my right leg straight up, but just could not push my left leg up at all. This was without being steadied, whereas before I’ve only partially managed it with someone holding me. Progress!

Then this week was the day before the summer solstice, and we had been told to be prepared to be outside for the whole time. I took a sweater with me although I only needed it for the very beginning and very end. There is something quite earthy and magical about doing yoga outside, under the trees, with the sound of the wind rustling the leaves and birds singing. After some warms ups the main part was sun salutations- last year we did the same thing where we did 3 sets of 9 sun salutations (and a set is one on the right and one on the left). In between we did some other poses to help release shoulders and wrists and by the end I was really feeling it. It’s also a bit hypnotic doing the same move over and over again. Before our final relaxation we did some partner work on shoulders (sitting back to back and linking arms or twisting around) which really helped. The final relaxation was just so peaceful and grounding. I was feeling very zen after!

Generally though I’ve been quite tired recently. This time of year is always draining and I think it’s been affecting me more than I realised at first. For the summer term we have had a staff yoga session on a Thursday- it’s been for complete beginners and is a slightly different style to the class I am used to but I’ve enjoyed it so much. As Thursday is also a run day, I’ve been stopping on my way home for a short run after yoga, but I’m not sure if that has been too much.

Last Thursday the run after yoga felt like wading through mud, but we did a lot of leg work so that could have been why. At the weekend (after Upton something parkrun on Saturday) I did an 8 mile run on the Sunday and had to walk a few times- not sure why as the route isn’t particularly hilly and I wasn’t going fast. 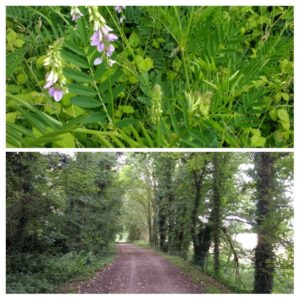 After that I did some gardening, and part of that was planting on seedlings which I did crouched down, and my legs regretted that later! On Monday we had a nice walk in the evening to stretch out my legs but they were still sore.

On Tuesday my back and legs were sore (and my wrists, no idea why) but I went out on a run to see if it would ease my aches. I probably shouldn’t have- just under 4 miles took me just under an hour as I walked so much of it. I just felt shattered. 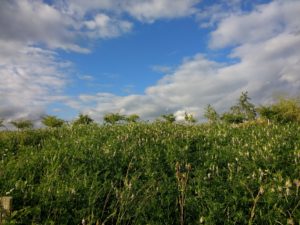 It was a lovely day to be out, and I saw so many rabbits, so I ended up taking a lot of photos to distract myself. I decided then that I would not be running after yoga this week, and so hopefully I’ll be feeling better by parkrunday.

I did get some baking done at the weekend: 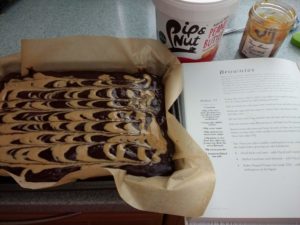 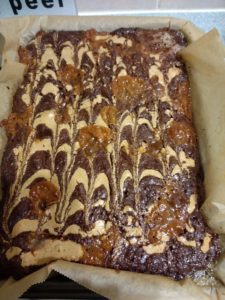 The caramel is in the middle but lots of it leaked out during the baking.  They are very tasty as they are all gooey in the middle (and of course, peanut butter).

I’m excited for the weekend as we are going to see The Foo Fighters tomorrow evening- Andy got me tickets for my birthday.

What do you have planned for the weekend? What would be your ideal brownie? I do like ones with raspberry and white chocolate, or anything nutty. Are you happier exercising outside or indoors? I would pretty much always choose a run outside over a treadmill, and there is something so much better about fresh air.

8 thoughts on “Lots of yoga outside (and some baking)”