After the 10 mile run on Sunday I was feeling fine when I got back, but later in the day we went out on a walk, and then as soon as we got home I started doing some things on the computer (I have to change my name on my passport, and that started off a whole chain of name-changing paperwork), and after that I felt really stiff. I ended up icing my lower back to see if that would help, but still on Monday morning I was still finding it hard to put the weight on my left leg because the pain was going down the sciatic nerve. I decided to try and ease it out by doing some yoga, so I went onto You Tube and came across a couple more videos that Josie, my yoga instructor, had uploaded, so I worked through the shoulders one first, then the hips one, and finished with a little foam rolling, and after all that I felt loads better.

I had to walk around to the Post Office (posting off passport and driving licence forms) and decided to extend the walk for a few miles. I ended up walking about 4 miles, and felt back to normal again- something about yoga is rather magic. 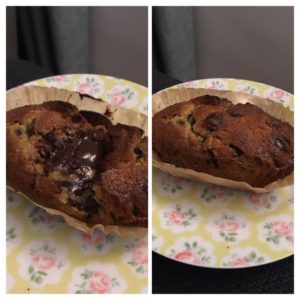 The Pudding Stop now do bake at home puddings, and a while ago I had bought a couple of their cookie dough puddings and put them in the freezer, so as a half term treat we decided to have them on Sunday evening. They were amazing- crispy on the outside and gooey in the middle, although I think we could have just shared because they were super rich.

I had a fair bit of work to do, so I decided to try and get it all done on Monday so I could just relax for the rest of the week. I also started on the long list of companies to contact in order to change my name (our wedding certificate finally arrived- the first one got lost in the post). I had to go into Halifax but it was all OK (the US certificate confused them a little but it went through in the end) but then after getting home and ringing up John Lewis (as I have a card with them) I was told I needed to go into the store and show them the certificate- I had just come from town! Never mind, I can always walk in later in the week (so I decided). 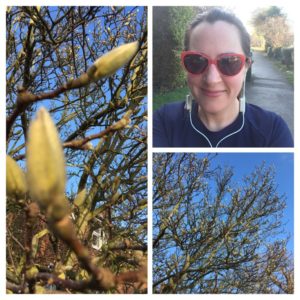 On Tuesday morning I headed out on a run and it was just beautiful- a little chilly (my hands got very cold) but so sunny- I even cracked out the sunglasses. I saw so many signs of spring, including a huge magnolia covered in buds. I am sure I read somewhere that because of the type of winter we have had, the spring is going to be very colourful this year.

I had a massage booked for early afternoon, so decided to have a big breakfast as then I wouldn’t need lunch (I can’t eat lunch before laying down and being pummelled…)  so I made a sort of baked French toast with a hot cross bun and some summer berries. 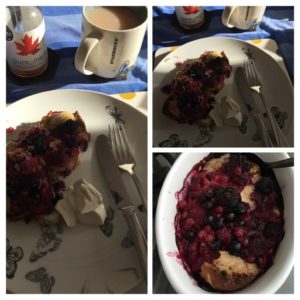 I then got into super efficient mode- Monday was for work work, and Tuesday was for home admin/work. I cleaned the windows, I cleaned my trainers and trail shoes, I vacuumed out my car. Now, I am not a person who keeps a lot of junk in their car- I cleaned it out and that meant I had to throw away one old parking ticket and one old air freshener- but in the passenger side pocket I found this small tube which contained a teeny pair of reading glasses. I was so confused. I hardly ever even have someone in the passenger seat;  Andy, my dad on the way to a parkrun, and maybe someone from work/ a friend if I pick them up on the way somewhere. My dad does have reading glasses, but not like these ones, and also he wouldn’t take them with him to a parkrun (he doesn’t even remember to bring them if we go out to eat to read the menu with). I can only think that when the car last had it’s service, one of the mechanics left them in there (as they fill in the little book?). It’s a mystery, and now I don’t really know what to do with them. 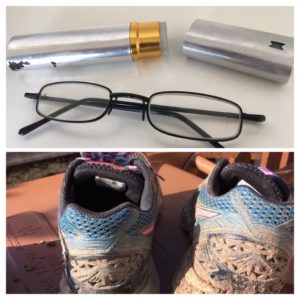 I also attempted a few more name changing things, sending off the car log book and sending off for a form from the DVLA to change my driving licence.

Jobs ticked off, I drove over to St Albans and walked into town (I park around 1.5 miles from the town centre) ready for my massage. 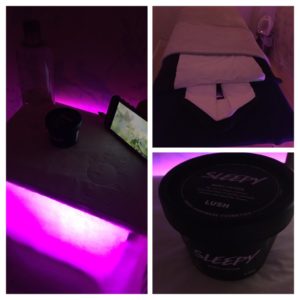 It is always so very needed- it is mostly relaxing despite it being deep tissue and working through all the knots I seem to get on such a regular basis. The therapist used this gorgeous lotion from Lush, and after it finished I popped into town to pick up a few bits, and was complemented by a sales assistant on the vanilla smell. Even though I had some very painful parts to the massage I really felt like I could have fallen asleep on the table at the end! On the way home I took my car to the car wash- I always find it super awkward and I have no idea why- I mean, where are you supposed to look when they are hosing down your car?  More jobs ticked off.

On Wednesday I did the same yoga workouts again first thing, and then spent the day with relatives- first Andy’s sister in law (is she also my sister in law?), our niece and nephew, and then my mum. I got home in time for a walk in the daylight, and then we were off to the cinema to see Green Book. I was worried it would be a bit heavy going, because of the subject matter, but I really loved it, and found the relationship between the two main characters really engaging and endearing. Yes, there were some appalling parts to the story (one of these is in the trailer when the musician is told to use the toilet in the shed in the garden), and the fact that some of these things still happen 50 or so years later is also shocking, but overall I found it to be very enjoyable.

On Thursday I headed out for another run- my favourite 5 mile route, making the most of the cooler weather by wearing my long sleeved Run Disney top (from the 10K race)-  and then had some lovely bircher muesli after my shower (I basically soaked some muesli and chia seeds in soya milk while I was out running, and then added some nush almond yoghurt when I got back, stirring it around to make it all the same texture). I also had some red velvet tea, which turns pink when you add milk- it was the same colour as my Minnie Mouse bowl although I couldn’t quite get the lighting to show it properly. 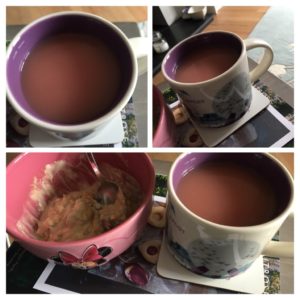 I had a few more jobs to get done and spent a bit of time in the garden, cutting up some bits of wood to take into work and topping up the bird food. It was another gorgeous day and it was so good to be spending time outside, pottering about. 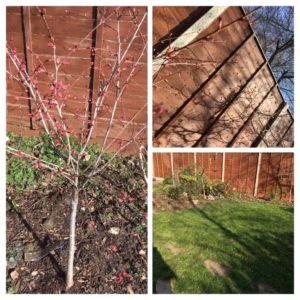 I had some rather brown bananas and of course the only thing to do with them is to make banana bread- I used the recipe in the Leon cook book which in addition to mashed up bananas had a banana sliced length-ways and baked in the middle. Of course I sprinkled some chocolate chips on top because banana bread with chocolate chips is king. 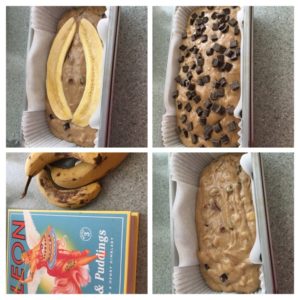 Later I walked into town, ready to pop into John Lewis with my marriage certificate, only when I got into the store, they told me they couldn’t change my details in the store, and I’d have to call customer services- I phoned them on Monday and they told me to go into the store- argh! I also tried to change the name on my Post Office card (I just use this when on holiday as it has a better currency converter rate) but they didn’t know how to do it either and told me to maybe look online (which I had)- this is turning out to be harder than I thought it would be! 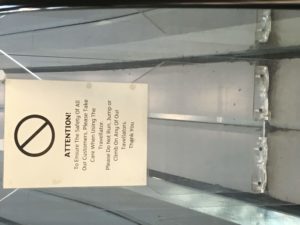 I had to get a few bits in Sainsbury’s and this sign (which usually makes me laugh) just annoyed me- if you have invented a word (travellator) then at least spell it consistently throughout the sign (they miss out the r at the bottom so it turns into a tavellator). 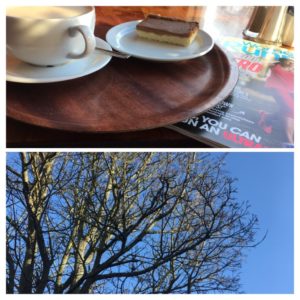 I decided a sit down and a read of a magazine was needed to cheer me up, so I treated myself to a chai latte and a caramel shortbread (although I was going to get a toasted tea cake, and then in the queue convinced myself that they were burger buns- why would they be in a cake stand then Maria???- and so at the last moment chose a caramel shortbread, and immediately after noticed the writing on the cake stand announcing the tea cakes- eye rolls at my silliness) and time to read my magazine and people watch out of the window.

Once home, John Lewis called to let me know of the address I need to send the form off to (because why would it be available on the website, or why would I expect the customer service people in the store to know this??). 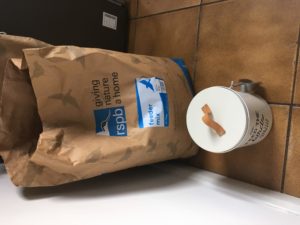 I had to laugh when I got home because I had ordered some bird food for the garden- last year I got some big-ish sacks, and the RSPB website were doing 30% off the sacks last week. It turns out what I was picturing and what turned up were very different in size- I think this sack will keep the birds in the garden going for a very long time- luckily I can make a bit of space in the utility room for the seeds!

In the evening I went out to dinner with some friends- I chose hummus to start and it was an enormous portion- I had a fair bit but of course needed to save space for the main, and so when the waiter took the rest away he asked me if anything was wrong with it- I had to explain that it was delicious but just huge (whereas everyone else had starters that were more like normal individual portions)- I am sure if Andy had been with me we could have shared just fine. 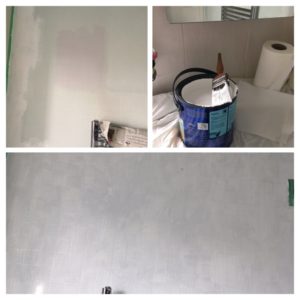 On Friday morning I painted the ceiling and wall of our bathroom- it has needed doing since we moved (nearly 3 years ago now) but we just keep putting it off. As we are off to Brighton it seemed like a good time because it can be left to properly dry.

If you reached the end of this post- well done indeed! It seems I have managed to fit a lot in to this week.

Have you had hassle when changing your name/ address? (The address change was annoying enough but this seems so much harder somehow).

Do you like decorating? I am happy with a paintbrush but I cannot stand wallpaper stripping.

6 thoughts on “Yoga is magic and a happy half term”