I think my love of Brighton in general is pretty clear- it’s such a lively place to visit, you can walk along the seafront to Hove, you can have tea and cake in a cafe, and their sporting events always attract such good crowds. I didn’t do the half marathon last year because I signed up to Cambridge instead, but I really missed doing the Brighton run, so signed up to 2019 asap. It turned out to be in half term (often it’s the week after) so it meant we could head down on Friday afternoon, and check in and get to Bird&Blend for a drink before it shut. Just look at the weather that was predicted- Easter weather! 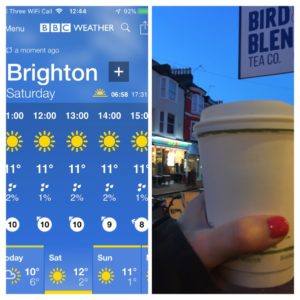 I went for a special of a Black forest latte- very good indeed.

Initially I wasn’t going to go to parkrun, and when I mentioned this to Andy I said I thought they were all a bit too far away (usually I would run to them, and run back, but the day before a training run is different to the day before a race and I wanted to be sensible) but he started googling it (I think probably knowing that I would be maybe a teeny bit less cheerful if I missed my parkrun fix) and it turned out that Preston Park was just over half a mile away, so I decided I would head there and go slowly. 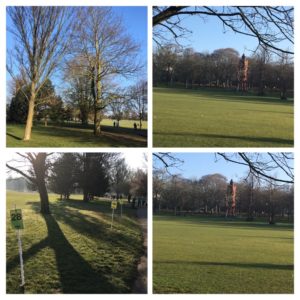 It was such a beautiful morning with bright blue skies and just a gentle breeze. As I was meeting Andy for breakfast straight after, I’d taken a top to wear over my t-shirt, but within minutes of my (very gentle) jog to the start I was boiling and had to tie it around my waist.

I love that they have the estimated finish times at this parkrun, as it is a busy one (just under 500 runners this week)- I made sure I started close to the back and just took it steadily. A couple of weeks ago on a Monday my knee felt a bit dodgy, so I made sure that in half term I didn’t run too far, and had a day off between runs, so I did wonder if running 2 days in a row would be OK, but I just kept it steady and enjoyed the laps of the course, finishing in 32:38. 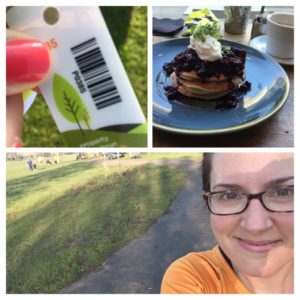 Then it was off to Cafe Coho for pancakes and people watching (we got a window seat), back to the hotel for a shower, and then out to enjoy the sunshine. On the Friday night I’d seen this cat bus mural, and I’d happened to pack my cat bus t-shirt, so I decided I had to wear it and have my photo taken in front of it! Totoro was even being shown on Film4 on Sunday. 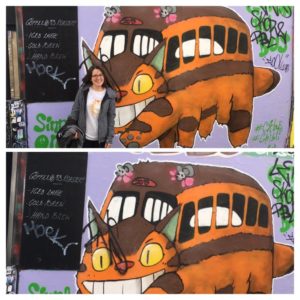 Of course to make sure I was staying hydrated I got a drink to take with me on our walk (this time the classic  chai latte) and then we sat on the beach for a bit before walking along to Hove. 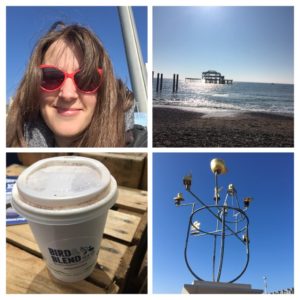 It was a bit windy (as you can tell by my hair!) but so warm and sunny.

We popped to Pret to share a wrap for lunch (not needing anything too big as we had a late breakfast) and then had some tea and cake a little later- this was a gorgeous lime and pistachio cake. 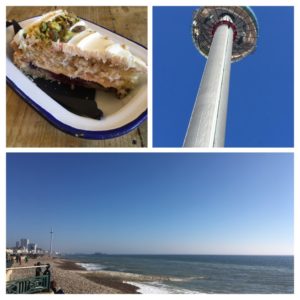 Dinner was at Food for Friends (a really nice veggie/vegan restaurant) and a fairly early night then called, with me putting my race number on my vest and making sure my kit was ready. 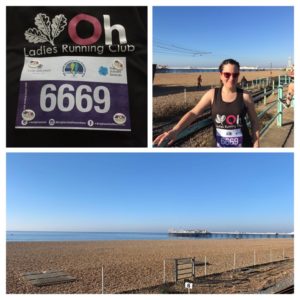 I didn’t actually measure the distance from our hotel to the start, and ended up doing a bit of a panic jog to the start, only just getting to my pen in time, but no matter, I wasn’t using the bag drop or the toilets so I just needed to be there. I had looked into a 2 hour time (the easy to remember 9:09 mile splits) and thought I would follow the 2 hour pacer and see how I managed, but the pen was so crowded that I couldn’t even see the pacer once I was in there.

The route was slightly different, heading along the coast first (whereas when I have done it before, we head to the pavilion first, then east along the coast, then west to Hove and then back). I am not sure if this made it feel busier, because the part to the pavilion is wider and so the runners thin out a bit more. I found the first few miles very crowded and I was getting a bit frustrated as I kept getting stuck behind people.  I did love it that just after the 3 mile sign I heard a guy say “is that half way?”… Anyway, I found it super crowded and at first I thought that it would be fine and I would run these miles slower and then speed up later, but then I think my first few miles were too slow for that, so I decided I would just enjoy the run, the sunshine, the crowd support, and not stress about the 2 hour time.

(The route is basically 3 and a bit miles east along the coast, gently uphill and flat, turn back and come back to the centre, have the 7th mile going up and down by the pavilion, then head west along to Hove for 3 miles, turn and then come back).

I didn’t notice many of the mile signs- I saw number 4 which said something like “more downhill- wheee”, and at mile 10 is said something like “Hove prom awaits”, but sometimes I’d glance at my watch to check on the pace and notice that another mile had ticked by. As I have said before, the crowd support was brilliant and I saw so many funny signs. There were a few groups of drummers out, and as you go out and back you passed them a couple of times. I always find the bit towards Hove the tough point, as you know you are going to turn (and can see runners heading back by the seafront) but it feels like a long way before you do. I don’t always have a drink in races, because it can make my stomach feel all sloshy, but it was hot so when I saw a water station coming up after 9 and a bit miles, I decided to stop and have a few sips. (Side note- they used paper cups which is so much better for the environment, and at the finish you got a can of water which, as it said on the can, can be recycled forever. But I didn’t always see signs for the water stations coming up, so suddenly people would be running across and the poor volunteers were all shouting saying that more water was further up).

After the water stop (there were others) it wasn’t long before we turned and saw the 10 mile sign- just a parkrun to go. I think at that point I was at about 1 hr 35, so I knew that I wouldn’t be able to run the final 3.1 miles in 25 minutes (seeing as I can’t run a parkrun that fast) so I just enjoyed the sights, listened to people chatting, looked for funny signs in the crowds and just felt happy running in the sunshine.

I think the unexpected heat had taken some people by surprise, and I saw a fair few runners being treated by the side of the road. With about half a mile to go, I suddenly felt really dizzy, sort of if the inside of my head was spinning to the side, so I slowed up and nearly stopped, trying to take some deep breaths- I didn’t want to be one of those runners. I felt OK so I carried on to the end, although I must have  been overtaken by loads of people having sprint finishes- I didn’t fancy risking it. Just after I crossed the finish line a runner needed treatment at the finish line so they started moving everyone over to one side.

I was given a medal (and the lovely lady told me she loved my sunglasses, but all I could do at that point was say thanks- I was trying to say thank you for volunteering but again I felt a bit weird). There were cans of water (as it said on the can, a can can be recycled forever) and bananas (hooray), foil blankets and energy gels, which I left. I had the water and banana asap as I thought I probably needed them both. It feels like you walk a long way after finishing before you can exit the finish area and start to walk back. 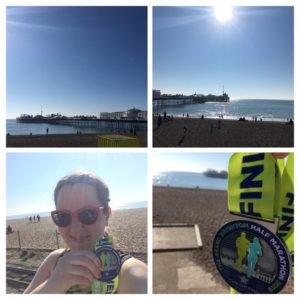 I took a few photos and then called Andy- he usually meets me at the finish but because the start time had been moved back (because of the train line being closed) we were not sure I’d make it back for a shower before check out. I was glad of the foil blanket because Andy had my jacket, and when I looked on google maps and found the quickest route back was 1.5 miles I did suddenly feel rather weary. I stopped off at Caffe Nero and got a cup of tea which helped. Rather brilliantly, when I got back to the hotel, I had missed  the check out but they had put on an amazing service where you signed up and were given a room to use for a shower (it had a huge pile of towels in it), so I could have a shower before we went to get some lunch.

My official time was 2:03:38- when I did it 2 years ago I finished in 2:03:23 so at least I am fairly consistent!  But the most important thing was that I really enjoyed this race- I love running in Brighton.

We went to Leon for a quick lunch and then on the way back to the car we walked past Cloud 9 so I got us a little cupcake to share after dinner. 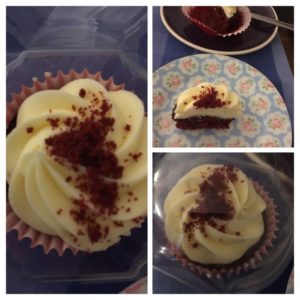 And just to finish, here is a picture that google photos came up with- two pictures one year apart- anyone remember the Beast from the East? 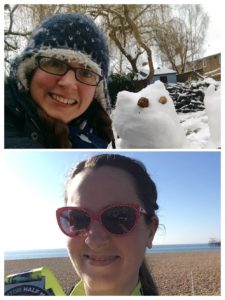 Did you run or race this weekend?

6 thoughts on “Brighton half marathon 2019 weekend- what a scorcher!”