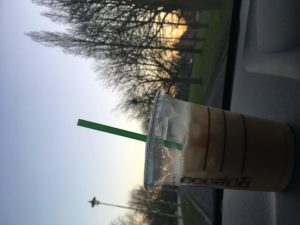 But first- recovery after the Brighton half marathon looked mainly like walks after work (it was so warm on Monday that when I popped into town after work I ended up getting an iced drink (but had forgotten my metal straw- so annoying). I was pretty stiff after sitting in the car for half an hour, so I did a lot of foam rolling that evening which helped. I had a few late meetings, so no evening runs or yoga, but I did have one early morning run just as the sun was coming up- a gentle 3 miles was plenty. 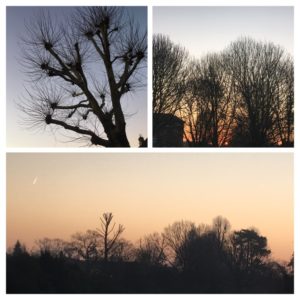 The light evenings are so noticeable now- we’ve been on a few evening walks and it has still been light!

On Saturday morning I picked up Dad and we headed to Dunstable Downs for event number 2 of the parkrun. I’d heard it was a possibility last year (and back then needed a D for my alphabet) but as parkrun like to keep new events fairly quiet now (which I totally understand as you don’t want new event teams to be swamped, and you want local park users to gradually get used to their park being used) it started fairly quietly last week. 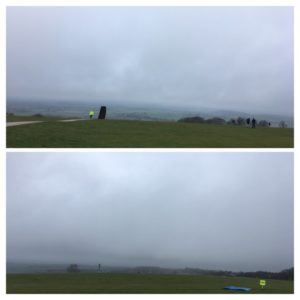 We always used to head to Dunstable Downs when I was younger as it is a great place to walk or fly a kite (and watch para-gliders), and it’s right by Whipsnade Wild Animal park. You are in a lovely elevated position with beautiful views across the countryside, although on Saturday morning it was hard to see through the mist and drizzle. As anyone vaguely local will also know, it is always freezing up there no matter what the weather is like elsewhere (the penguins at the zoo are always very happy)- but both Dad and I forgot this and neither of us brought our gloves. It’s National Trust land so you use the NT car park (display your parkrun barcode to park for free until 11am) and there’s a big NT centre with cafe and toilets- we stood on one side of it away from the downs to shelter from the wind. The new runners briefing and main race briefing were also held here, and then we walked around the front of the building into the wind, for the start of the parkrun. There was a handy tarpaulin on the ground for coats etc, so we kept ours on until the last possible moment! 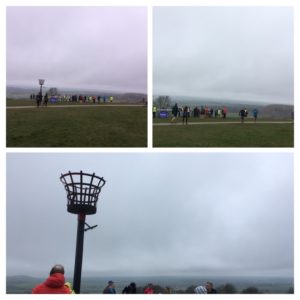 We stood only a few metres from the start, with most of the crowd behind us, hoping that the faster runners would move to stand in front, but everyone was chatting (I think because we’d already had the briefing)- the RD did try to get people to move forwards but not many people did, so after 3,2,1,go, we were fairly near the front. 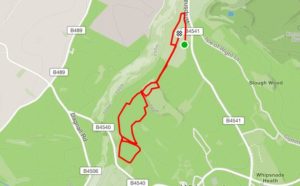 The route is one lap, although there are a few bits you repeat in the other direction. You start off running gentle down a field, away from the visitors centre, then running back up close to the start/finish area- this was a steep hill and I found it a struggle to keep going.  After that it was gentle undulating but nothing awful- around fields, a lovely bit through some woods  (which you went through on the way back, although on different paths). Shortly after we entered the woods Dad sped ahead of me, and I settled into a comfortable pace. I think my legs were still feeling heavy from the half the weekend before, and the little steep hill at the beginning sapped my energy, so I felt as if I was running slowly, so when I finished I was surprised to get in under 30 minutes (29:26), I thought with number 86 but then realised “I belong to parkrun” was upside down, so I was actually number 68/150 runners.  It was still fairly windy and cold so we didn’t hang about too much at the end.  A lovely event to visit and one I’m sure we’ll go back to. 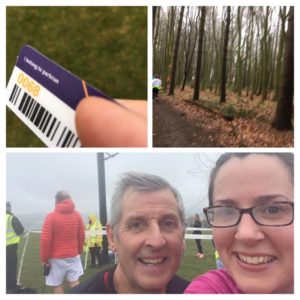 Then it was home for pancakes and tea and general relaxing. When I got home Andy had been glossing the woodwork in the kitchen and hall, so I got on with some work and we walked to town a little later. When I got back I remembered that I needed to top up the bird food (I keep remembering when it’s already dark) so I headed outside. I’ve been mixing a little bit of chilli powder in with the seed because I read it can put squirrels off (but the birds can’t taste it)- I am sure one squirrel can empty an entire feeder of seed in one sitting. Anyway, I was shaking the container and there must have been a clump of powder at the bottom as suddenly loads came out and up puffed a load of chilli, right into my eye (I had conjunctivitis) and it stung like mad. I had a bit of a panic (in this same eye in the past a little packet of shower gel exploded and all went in it, and I ended up with a mild burn, having to wear an eye patch and have several visits to the hospital) so I ran inside calling for Andy, who of course ran down to help me at the same time as putting his hand on the freshly painted banister…. Thankfully we washed out my eye (and washed it of my face- my nose and lips were stinging too)- not my finest hour!

On Saturday evening we watched Three Identical Strangers (I think it was on Channel4 last week) which was very interesting but also horrifying at times. 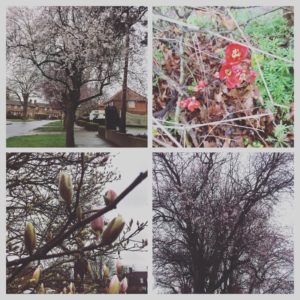 I was still feeling tired so on Sunday I just did a 6 mile run, stopping to take lots of pictures of the blossom- even in the rain and with grey skies it was all looking very pretty and spring-like. 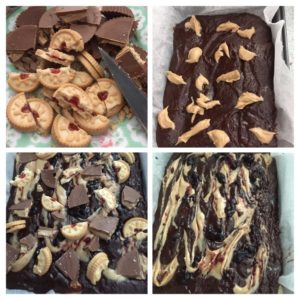 I did a bit of baking- I adapted the jammie dodger blondie recipe by swapping the white for dark chocolate, adding a later of jam and peanut butter in the middle of the batter, and topping it with cut up mini biscuits (I only had a few packs left from last time) and cut up pb cups, to make pb&j brownies. We took them over  to Andy’s parents- very tasty.

Did you have a good weekend? How do you recover after a race?