Sunday morning dawned bright and cold. After quickly getting ready we checked out and walked to the station, as we had a train at 8.15 to catch to Newcastle. After seeing hardly anyone on the walk, the platform was packed! The train company had left boxes and boxes of bananas out for the runners to help themselves to- such a lovely touch.

I couldn’t decide on breakfast, as I don’t usually eat before a long run, but my start time was 10.40am and of course it would be later than that, so I took some mini malt loaves with me and ate one after getting off the train.

Walking through Newcastle there was such a good atmosphere, after dropping our bags off (we found a Stasher location where you book online and pay for it to be locked away, as there were no left luggage facilities in Newcastle) we were soon at the start. The plan was to meet up with the whole of the fundraising team. I was running with MND as my Uncle Ken (who loved running and the GNR) wanted to run 20, but was sadly diagnosed with MND and passed away after running 19 of them. His son organised the team, including Ken’s wife, so 20 of us were running Ken’s 20th. Anyway, there had been lots of chat on the group Whatsapp, but when it came down to it we just couldn’t find them- originally they were going to be by the orange and white start, and then they messaged  to say they were somewhere else but we couldn’t find them. 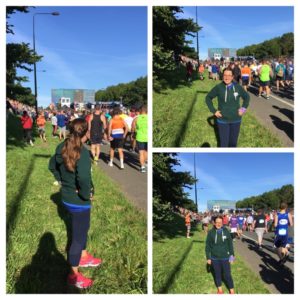 Andy took my “before” photo (it was chilly, hence the hoodie and t-shirt on top of my running vest) and so sunny- I kept closing my eyes so the turning was the attempt to only have to stare in the direction of the sun for a split second before he took the photo!

Anyway, we spent so long looking for the team that despite us being at the start a good hour before it started, when I went to my pen they had closed and I had to climb over a fence (other people did that too)- last time I ran it I think I was 40 mins before crossing the start line and nearly missed my train home, so I didn’t want that to happen again. 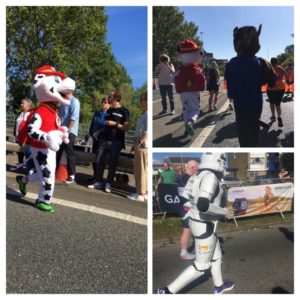 I didn’t have a real plan for the race- I thought I could beat my previous time of 2:27 (which was my first half marathon after having a significant operation and I really didn’t know if I’d get to the finish) but other than that no ideas. I knew it wouldn’t be a pb course for me (plus I hadn’t trained for a fast time, just trained to get up to the mileage)- it’s fairly undulating and doesn’t compare to Brighton in that way.

Anyway, it was hot, and very soon after starting I was regretting not packing any suncream or my visor. I tried to run on the right hand side which was in the shade some of the time. Kudos to the crazy people in massive costumes- I took the Paw Patrol photos as my niece loves them!

Last time I ran it (2012) it was a drizzly day and I remember not really loving the route – you run over the bridge early on which feels like a bit of an early part of the race to have something so iconic. Also loads of kids were throwing bottles of water and energy drinks at the runners which wasn’t fun. This time, perhaps because of the sunny weather, there were more crowds on a lot of the route, so even though the scenery for the most part was pretty boring, there were lots of signs, cheer points and bands to keep me occupied. There were also loads of people giving out goodies such as slices of orange and watermelon, various sweets, and one brewery was even handing out cups of beer!

I didn’t look at my watch until I’d run 3 miles, and that was quite nice to think I “only” had 10 miles to go. 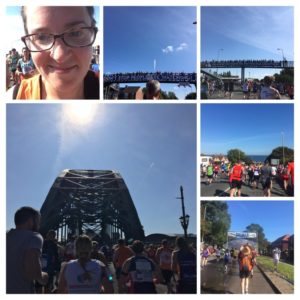 Along the route were some shower stations, which were amazing! Basically tunnels a few metres long, spraying fine mists over the runners. After running in the heat and sun these felt like heaven! Not so good for people wearing glasses though! The first few bridges had motivational signs (one said something like You’ve done the training, now settle in to your pace, and then another one less friendly-Don’t stop now people are watching…).

I don’t usually drink anything in half marathons- maybe a sip of water in the final water station, because usually if I drink more I get a bit of a sloshy stomach, but it was so hot and I knew I needed to (seeing as I hadn’t had much in the morning before going to the train station), so for the final 2 water stations I ended up picking up a bottle (booo) of water, and keeping it with me. There was a Clif shot block station at around mile 9 (mile 8.5 according to Strava where I slowed!), and I picked some up there as I used to quite like them when doing long runs and knew that they were safe for me to eat. They had cut the packs in half which was quite good, so each person had 3 in a pack and didn’t need to try to open them. The ground at that point was super sticky though- as I think there were actual gels as well. Bleurgh!

I knew there was a big hill coming up- last time the Red Arrows were doing an air display so I got to watch them as I ran. This time they weren’t even there (so I thought it was VERY cheeky to have the photo of them at the end…) but I’d said I would message Andy so he could work out when I’d finish, so just after mile 11 I walked for a few strides to message him- 2 miles to go and one of those would be glorious!

Once the hill was done, there’s a short steep downhill and you can see the sea! This is the best bit in my opinion! The crowds are crazy, you turn left and see the 12 mile marker and know that you are nearly finished, with a flat mile along the seafront. At this point I suddenly felt really overwhelmed with emotions, thinking about how Ken loved this race so much, and how special it was that so many members of his family, and so many friends were there for him. I also remembered that last time I had run it, I was looking out for members of my family, as Ken and Brian (the one who we do parkrun with a bit) were running it and so I was looking out for them. I had to try and think about other things, and ended up counting up to 100 and back again. When I actually crossed the finish line I burst into tears (which I’ve only done at marathons before)- a guy in the finish funnel next to me gave me a pat on the shoulder which was really lovely. 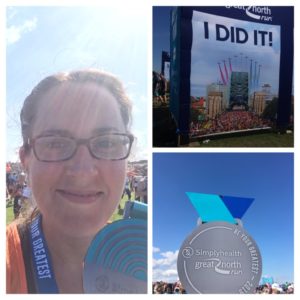 It felt like I was in the funnel for ages, getting some water, a medal, a goodie bag, walking past the people queuing for photos in front of the Red Arrows… At least my tears dried and I felt alright once I’d got another bottle of water.

I have to say I love the medal- such a nice colour, but the t-shirt is rubbish! I was so disappointed! They were unisex and the smallest was small, and it’s huge- just like my Bristol 10k one- what a waste of fabric. 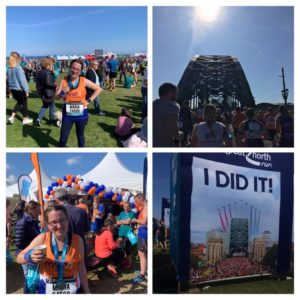 I found Andy fairly easily and we wandered over to the charity marquee- here they had “tea, chocolate and hugs”- I had a cup of tea which is just my favourite thing after a long run, followed by a banana (as the goodie bag had nothing that I fancied straight away). I had a lovely chat with some of the volunteers but no-one in my team was there- some of the faster runners had to head off, and others were still out on the course.

Last time we got the Metro back to the city centre, but the queues were awful, and Andy had seen that there were buses (to give you an idea, he had got the Metro out there, and even though my time was something like 2:15, he had only just arrived when I finished!), so we queued for a bus instead.

Once back in the city, we popped into Caffe Nero (it was right by the bus stop) and I got a chai latte and then used their toilets to change out of my really sweaty running vests (I wore my charity vest on top of my running club vest, as on its own it was too baggy and low cut), and also to throw out some of the heavy goodie bag (including a tub of tuna- no thanks!).

Also, look at what we could see from the bus- a giant teddy bear in a shop window! 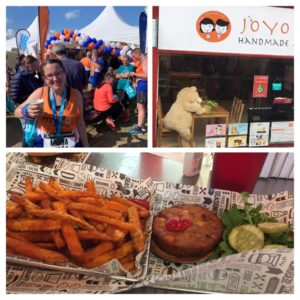 We went to a burger place because I wanted something really salty- we did share those sweet potato fries because the portion was enormous! The pickles were so good too! 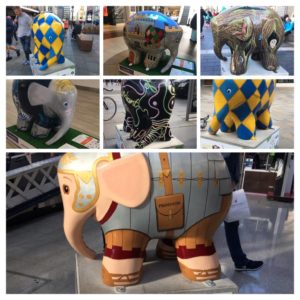 I took a lot of photos of the cute Elmer elephants around the city- I love things like this!

Then we picked up our bags from the hostel, I changed in the toilets and then popped to Pret for train snacks- I got a cookie and the lady saw my medal and gave us a second one for free- how kind! 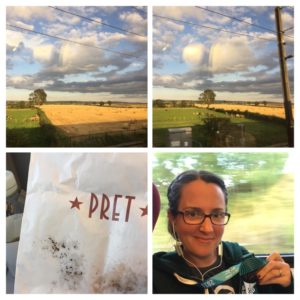 Our train journey was all good- we’d booked seats and although we had to change somewhere, and our second train was a bit delayed, it was OK. I think we got home just before 10pm, so it was time for a quick shower before bed time. 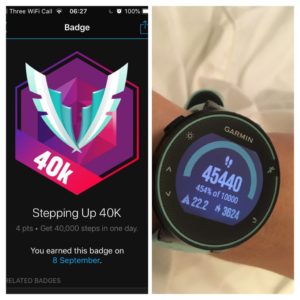 Not a bad number of steps, although I think I’d done nearly 10,000 before I even started the run! 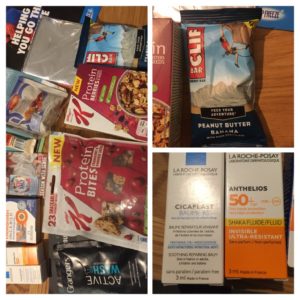 The total so far raised (from the team) is £9788 (out of £10,000 target)- if anyone feels they can spare a few pennies then please click here– the words written by Andrew (Ken’s son) are really special too.

My chip time was 2:14:49, so I was pretty pleased with that time because of the heat- solidly beating my time from before, although this run was not about finish times, it was about finish lines, and I felt so lucky to be able to make it to the finish line when so many people can’t.