After our late arrival to Durham the night before, I was thankful that Durham parkrun wasn’t too far from the town centre (just over a mile it seemed). However, I left plenty of time because I find Durham confusing as the river bends around in a horse shoe shape, so it just feels like you are spinning around the whole time (plus I didn’t want to be there, but on the other side of the river and no-where near a bridge). I had maps open on my phone (I put in headphones and listen to a podcast, as with the Pocket Cast app it pauses the podcast for each map direction, and means I can listen but not be wandering around looking at my phone making it obvious I am lost). Anyway, I think the satellites were having trouble locating me as I was often off road. I went wrong 3 times before going in the right direction, and then ended up taking the road route and not the riverside path that I had selected…

After running 1.65 miles I arrived! 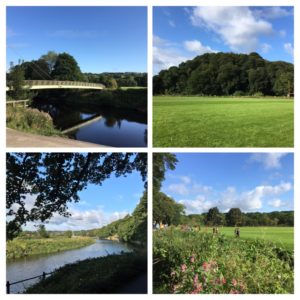 The start and finish are in different places (see the map below)- the finish is much more central. It started by a running track at the Uni (a proper track- how fancy), and then began with an out and back section alongside the river, then crossed over “the noisy bridge”, went around some rugby fields, then back to the river, along one side, over a bridge and finishing on the other side. The last section (before you crossed over the final bridge) had amazing views of the castle and cathedral. 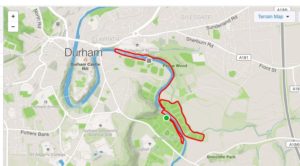 As I was running the GNR the next day (as were a lot of people judging by the number of tourists), I started near the back and tried to make myself take it gently.  I kept it nice and steady with a royal flush negative split- 10:02, 9:36, 9:12, 8:31 to finish in 29:43. I’ll happily take a sub 30 minute parkrun (and according to the usually nonsense on Strava, it was consistent with my usual efforts!).  The marshals were particularly cheerful, cheering everyone past with loads of energy. 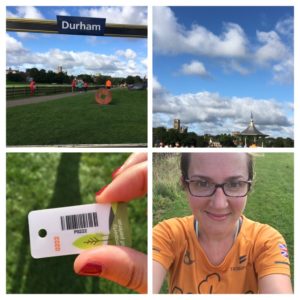 We hadn’t made plans beforehand (I couldn’t decide between stopping on my way back to the hotel for croissants/ cinnamon rolls, or going back for a shower and going out for a proper breakfast), so I messaged Andy when I finished, and as the hotel was around half a mile from the finish, I went back for a shower and we went out to Bill’s for pancakes. 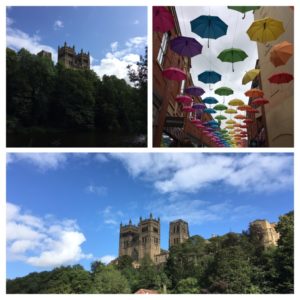 We then had a lovely day wandering around Durham – it’s such a pretty place. I love the river walk, and of course the beautiful weather helped.

A while back there was an interview with a guy on Marathon Talk who runs marathons in big dresses- there was a charity shop in Durham with a display of the dresses, and they are enormous! I had no idea that they were that big! 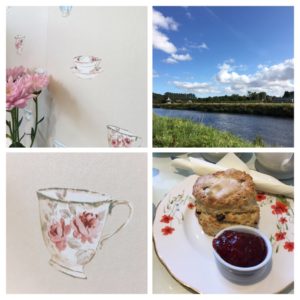 We didn’t have lunch (the Pret was no longer there) but we came across a lovely tea room so had a pick-me-up. I had some delicious vanilla Earl Grey tea, and a scone. All the cakes were home-made and were really good. The afternoon tea looked fab too- with one slice of cake (which you chose from the front) instead of all the little usual fancy ones.  And how pretty is the teacup wallpaper?

In the evening we went to an Italian for dinner (Prezzo I think?)- in the end I had a vegan pizza (really tasty) as I am not too keen on loads of cheese before a long run. We then headed back to the hotel to watch a bit of TV (we started the new Danish drama)- I’d done over 33,000 steps by then so I did need to put my feet up for a bit!

So, my 67th different parkrun event and a very nice one it was too. I do like a single lap (or point to point) route and the views were very impressive. I wonder how the event team get on with getting to the finish before the first runners though!

How was your weekend? How do you prep before a race?