I know January is a long month, but it doesn’t usually feel that long. I cannot work out why it felt so long this year! We didn’t go back to work until the 6th, which seems very late, but still that meant 4 solid weeks until the end.

Monday I stayed late at work and needed to get some bits from Aldi so on the way home I stopped off, meaning that once home I didn’t fancy heading out for a late run. 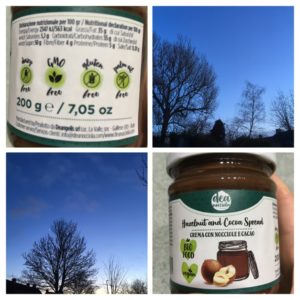 This hazelnut and chocolate spread from Aldi is amazing- I don’t get Nutella because of their questionable ethics, and most of the replacements just aren’t as good. This stuff is amazing, and apparently once opened you have to eat within 3 months- that won’t be a problem!

Tuesday I was home earlier and it was still not quite dark- progress! I went on a 4 mile run but I was surprised by how cold it was. Even once home and after having a shower and dinner I was still cold so Andy put the fire one, I heated my penguin in the microwave and we had a hot chocolate. 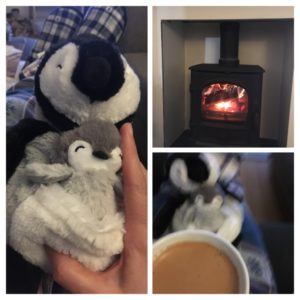 Wednesday was yoga, and we did a lot of strength work- so many variations of downward dog, side planks, press ups and all sorts of warrior poses. Towards the end we did a headstand practise and after helping someone else hold her pose, I was helped, but I just lose confidence as soon as both legs are up. I feel like I am going to wobble, and come down before I actually do wobble. I will keep working on it though!

Thursday I needed to get some cookery ingredients for work, so I changed into my running it at work, parked at Tesco, ran back to the business park, and then headed into Tesco once my run was finished. I was pretty hungry as I went around the shop (it’s a big shop too, and the things I needed were just not easy to find- this is why online shopping is better!) but I was very impressed with my impulse buying- barista oat milk (for the best hot chocolates) and baked beans! 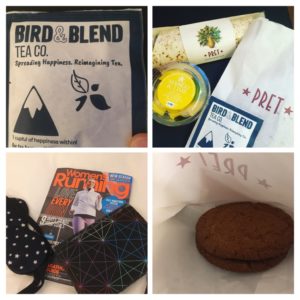 On Friday I rushed to get home as we were heading into London for the night, as Andy had a work thing. He was going out for dinner, and I was going to have a hotel room picnic, so we popped into a Pret by our hotel for me to get some food. I asked the assistant for one of their amazing chocolate almond butter cookies, and I thought she said to me “I will give you half” but she actually said “it’s on the house”. Then (once Andy had clarified) she said “we are closing in 5 minutes, I’ll give you two. Do you want anything else?” I said that it was only me eating, and she said “for breakfast tomorrow”. She was very persuasive, and we ended up with  2 ginger cookies and 2 of the chocolate almond butter ones.   I took them back to the hotel and had a nice hotel picnic alongside some tea (I always take the Bird & Blend samples if we go anywhere). The least said about Friday evening the better, as I was trying to avoid all the depressing political things going on, watching a travel show about Scotland, and then reading my magazine before having an early night.

Do you prefer actual shopping or online shopping?  Anything positive from January?

4 thoughts on “Finally the end of January!”