For the first weekend of half term, Andy suggested heading down to Southampton. He would get a ticket for the football, I could go to a parkrun, and we could visit his grandma. Sounded good to me. What with parents evening the week before, I hadn’t been out much (3 miles in the tail end of storm Ciara on Monday, and 4 miles on Tuesday) and hadn’t even had yoga as I didn’t get home in time, so I was really looking forward to parkrun on Saturday.  We were staying in the centre of Southampton, so my plan was to run to Southampton common- I’d done that before, so I knew it was doable, and would save faffing with the car and so on. However with another storm on the way (and I am sorry, but Dennis is the Dennis from It’s Always Sunny in Philadelphia to me) I drove, so that if for any reason Southampton was cancelled, I could look at other options. 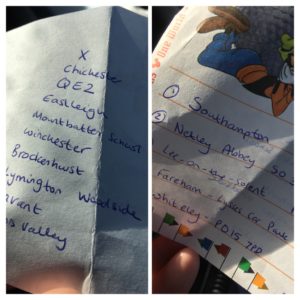 That turned out to be the right call. On Friday night the cancellations were coming thick and fast, and my list of potential ones was getting shorter and shorter (cancelled: Eastleigh- which would have been by Plan B, Mountbatten School, QE2, Brockenhurst, Havant, Moors Valley, Chichester, Winchester, Lymington Woodside…) and Southampton cancelled too. With the kick off being an early one at 12.30, I didn’t want to head too far away as we needed to check out and get breakfast beforehand. Netley Abbey was my Plan C, and then I think the tourist tool listed as the closest ones after that Whitely, Lee on the Solent and then Fareham. I wasn’t sure if I had time to get to the further ones, so charged up my headphones and decided that if all the closer ones were called off, I’d jut have a run by myself instead. But at 8am Netley Abbey posted that they were on!

I’d got into my running gear and so I could leave straight away. I knew I had to drive over a toll bridge to get there, and had made sure I had enough change to go both ways. However, when I got to the toll booth, I put the money in and nothing happened- a thing was spinning around, but the barrier was down and the charge was still displaying as if I hadn’t paid. I could see my 20p coin in the wheel, but there were no coins in the rejected coins slot, so I put some more money in and again nothing happened. I pressed the help button, but nothing happened there either. I only had enough money with my for one more try, so I reversed out (luckily it was very quiet) and went to the next booth, and thankfully that worked. I was feeling rather stressed out- it is cash only so I am not sure what would have happened if the payment hadn’t worked then. 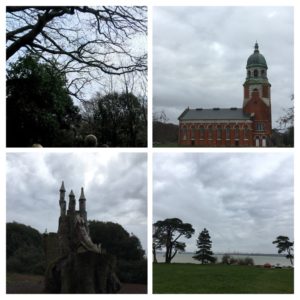 Driving into the park I saw a fair bit of flooding, but the actual park was fine. I’d been there before with Andy for a lovely walk by the sea (back in 2018), so I knew a little of where to park.

It was very windy at this point, but thankfully no rain. I was only there about 15 mins before the start, and fancied doing a bit of a jog to warm up but didn’t want to miss the first timers briefing ( I think it has lots of different routes) so I just stood around instead. I expected it to be busy at Southampton has around 1000 runners so I thought some of them would head over.

The first timers briefing was nice and brief (3 laps- the important bit!) and it was hard to heard the RD because the mic was broken, so they had to shout- not easy in all that wind! They did mention that one of the golden batons was being passed on, but I couldn’t see it, or hear where it had come from. Anyway, soon we were off and running along, avoiding the puddles. 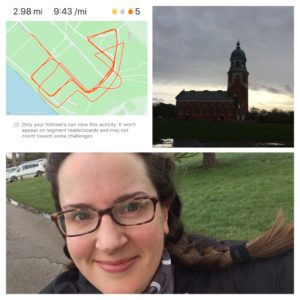 I noticed once back at the hotel that I had splashes of mud on my face, and looking at the picture I could see one on my nose and chin!

You can see from my Strava screenshot that GPS does not like wind or trees, and I am keeping this as proof that if anyone moans that a course is inaccurate because their GPS was short or long, remember that the only accurate way to measure a route is physically measure it with a wheel. This parkrun was 3 identical laps, and I am very sure I did not veer off at any point! The first bit of each lap felt busy because it was fairly narrow paths with runners further ahead going back on the same path (keep left) and then in the next lap the faster runners were lapping in the same direction, with other runners passing in the opposite direction. The bit by the water seemed wider (and was just one way) but it was so windy, my legs were being blown into each other! I wasn’t fussed about time, but somehow managed mile 2 and 3 with the exact same pace (9:19), finishing with token 203 for a time of 29:30. 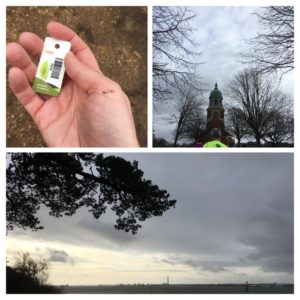 I ran back down to the water to take a few photos, and then headed to the cafe where I needed to buy something to get change for the toll bridge (as I’d used up my change on the way).

After buying some tiffin and running back to the car, it turned out that the pay machines were by the cafe. As I was running back to the car the first time a group of runners commented that I had some cake in a box, and as I ran past them the second time (after paying) they asked me what I was doing- I think they thought I had gone back to buy more cake! So I had to explain that I needed to pay and didn’t realise the machines were by the cafe. Although to be fair, there were lots of lovely looking cakes so I could have easily bought more! 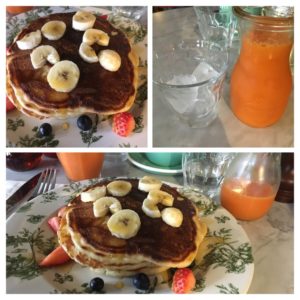 On driving back to the hotel I had another fail- I just typed in the shopping centre into Google Maps, because that is where we had parked, but it actually took me into the high street and to the pedestrian entrance, and with no-where to pull over I had to just drive in the general direction and try to work it out. I was doing so well for time, but it ended up being a bit rushed – we walked to Bill’s but they had a long wait, so we went back to the hotel, I had a shower and we checked out, and then went back to Bill’s. Thankfully they had a table, so we had a nice brunch before Andy was off to the football. Their pancakes were huge- normally they are more like scotch pancake sized, but these ones were like side plates! I couldn’t eat all of mine. I went for a juice (carrot, apple and ginger) which was so refreshing and delicious. 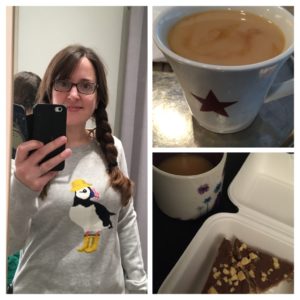 While Andy was at the football I wandered around the shops for a bit- I got a few birthday cards and gifts, and I had a John Lewis voucher so bought this cute puffin jumper (makes a change from penguin jumpers). Then I sat in Pret with a cup of tea and listened to some podcasts- much nicer than walking around busy shops!

Once the football was finished we went to see Andy’s grandma before the drive home (which was horrendous- so much rain and wind and wet roads- urgh)- I needed that tea and tiffin when we got home (I shared the tiffin).

Anyway, what a lovely start to half term, with another parkrun visited and brunch out.

Did your local parkrun cancel due to the storms?

6 thoughts on “Plan A/B/C for parkrun! (A visit to lovely Netley Abbey)”