Unless you live under some sort of social media protective bubble, you can’t have avoided the fact that there won’t be another parkrun on a leap day for many years, so of course all the parkruns were doing various themed events. Ellenbrook were running their course in reverse, and I missed this last time they did it because I was marshalling. I had already volunteered to tail walk at Jersey Farm, so I shall have to wait for another special occasion for EF (FE?).

I had originally thought I would borrow something from work for fancy dress, but totally forgot until I was driving home on Friday- too late. I remembered my Kermit hat though- perfect for the frog leap theme, and also pretty good for the weather! 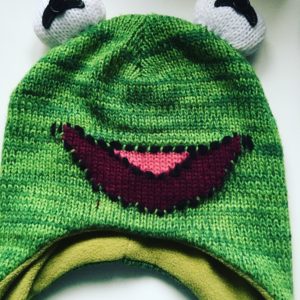 The weather was pretty bad- pouring with rain and more wind thanks to the next named storm. I checked it was on, as I saw a few cancellations (nothing too close) but all was good. I drove to Dad’s and then we walked around together, leaving it until the last moment. The start/finish area is the highest part of the route, in a big open grassy field, and it was properly boggy and squelchy. Dry socks was not an option! 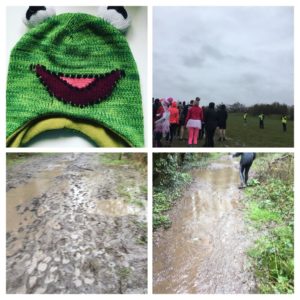 Bottom right you can see someone trying to avoid the water, but it was really pointless because even the grass at the side was boggy!

I was going to be tail walking with a D of E volunteer (I don’t think they can do roles like this on their own) so we chatted a bit, and then a lady came and introduced herself, explaining she would be walking as she was recovering from a foot injury and could not go any faster. It’s funny with tail walking- you never know if you will be walking or jogging, but of course you are prepared for both. I was thankful of my trail shoes, but the puddles were so huge. In fact, they weren’t puddles, basically most of the paths were like little streams so it was really tail-wading around the course! The first part was tricky as it is narrow in places anyway, and once the faster runners started heading through we had to walk in single file and often step over out of their way (to try and minimise the splashing from them too). Dad cheered us on his way past, and we saw a few fab costumes (a child and her mum in frog outfits and hats, a cow onesie, and a bird costume complete with feathery wings).

It’s two laps and as we were coming up to finish our first lap, Dad had finished and gave us a cheer- he was going to head home and I’d meet him there once I was finished- no point in him standing around getting cold and wet. 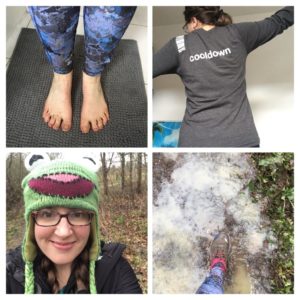 The rain had stopped during the first lap, but my feet were just soaking. At one point I had stepped to one side and a runner went through the middle of a puddle and went up to her knee on one leg!

I finished with token 120, which seemed very low for a tail walker but no surprise that the conditions had kept a lot of people at home. My time was 61:31 (and I am sure that has changed, in that the last time I was tail walking and finished in over an hour my time was written as 1:01:something?).

I ended up chatting at the end for a bit, and so when I finally started the run home I was very cold. I’d brought a change of clothes but had a quick shower in the end because my feet and legs were so muddy. Then it was time for pancakes and tea- the hot tea was especially needed!

Fancy the mud-fest to get your J for the alphabet? Did your parkrun have a leap day theme?