So the past weekend marked the start of the Easter holidays, but with all the measures still in place it means I basically have less to do. (Well, I can spend more time gardening and decorating, when I would have been doing work during the day). 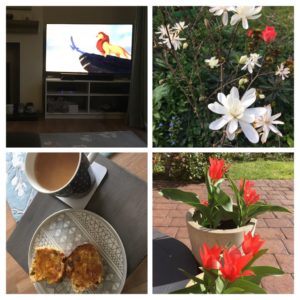 After finishing work I spent a bit of time in the garden, pottering about and also walking around. Because I hadn’t run, once Andy finished work we went out on a walk and then had a pot of tea and a hot cross bun. We started watching Joseph after hearing that it was being broadcast on You Tube, but I thought it was going to be the stage show- it turned out to be a weird film with a sort of fake assembly going on-  I think we lasted about 20 mins! After dinner we went for the Disney classic of The Lion King (and the classic animated version).

I’ve got a lot of holiday projects to do- decorating the hallway (we worked out that we started taking the wallpaper down on the August Bank Holiday  2019- it might be the longest DIY project yet), lots of gardening and planting, and lots of sorting and organising inside. I would usually listen to the radio a fair bit while at home, because it feels like something is keeping me company (and Andy is still working), but at the moment the radio just feels stressful, even if it’s a music station because they keep having news headlines and I just don’t want to think about this stuff all the time.

I have a lot of regular podcasts that I would listen to on my runs, or when driving to and from work, or just doing things like cleaning. But I also like a series that I can get absorbed with, and listen to it while gardening or even just walking laps of the garden.

Recently I listened to all of Girl Taken, which followed the story of a man who volunteered in the Calais Jungle, and ended up working with a journalist to try and reunite some family members. It was interesting and did have a sort of conclusion, and not as heavy going as some crime podcasts. In the past I have liked series such as The Lighthouse (investigating the disappearance of a tourist in Australia) and Death in Ice Valley (I could listen to this again because the person from the Norwegian radio station had such a lovely accent- they investigated a body found in Norway in the 70’s). The Australian has made a few podcasts that I’ve found interesting- The Teacher’s Pet (about a person who went missing 36 years ago), and Who The Hell is Hamish (about a con-man). One I did not enjoy so much was called Fake Heiress- I had heard an interview with one of the friends on a different podcast, but this was a part investigative and part dramatisation of what had happened and I just really do not like radio dramas. I am not sure why- I don’t know if because you can’t see them the actors have to put more emphasis on words or something, but I just got really irritated by the dramatisation bits.

For some total escapism and way more gentle topic I have recently discovered The Bake Down, which reviews each episode of the 2019 GBBO. The idea is to listen each week, but they talk enough about the episode that I can sort of remember. Because two of the people on it were previous contestants, you get interesting behind the scenes things (when they start filming/ who does the shopping/ when they have to submit recipes etc).

I also love a documentary, and luckily for us Netflix is full of them. I saw this article the other day, saying that if you enjoyed Tiger King, these are good for you, and it turned out we had seen most of them already. (Not sure enjoyed is quite the right word- became fascinated and horrified with…). Anyway, Wild Wild Country was very interesting (about a cult being founded), the Fyre documentary was good (about the festival that never was), Three Identical Strangers (recommended by Mark Kermode on the film podcast- sooooo fascinating), Abducted in Plain Sight (terrifying), Don’t F*ck with Cats (again, terrifying), and probably the most relevant, Blackfish (never going to Seaworld again after that). The only one I haven’t seen from the list is Tell Me Who I Am, which is on our list.

I tidied some shelves listened to a Bake Off podcast the other day- a very calming combination! 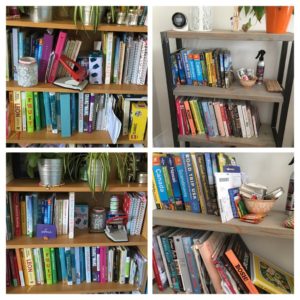 Left column- before on top, after below. Right column, before on the bottom and after on top.

Do you have any podcast recommendation? Particularly for good series? Or any good documentaries? On a side note, did anyone see that Trump’s son watched Tiger King and his takeaway was that you could buy a tiger for as little as 2000 dollars…… if you watched that series and that was what you took from it, you’re watching it wrong!!!

2 thoughts on “Documentaries and podcasts to keep me occupied”