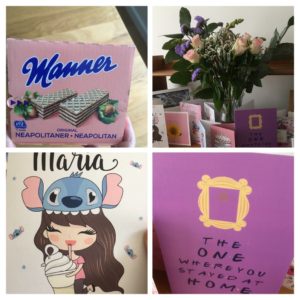 Usually my birthday is around the May Bank Holiday, so often we’d head off somewhere for a 3 day weekend. We’d not booked anything for this year, partly because we had Disneyland Paris for the following weekend, and also because the Bank Holiday had moved to the Friday, so it was just a normal weekend. On Saturday morning I still wanted to do my not a parkrun run, and be back for the quiz. Typically if we were around, I would have gone to Ellenbrook Fields for parkrun, met my dad there, run with him and then headed back for pancakes made by Mum. In order to replicate that, I made us pancakes and sent my parents a photo! 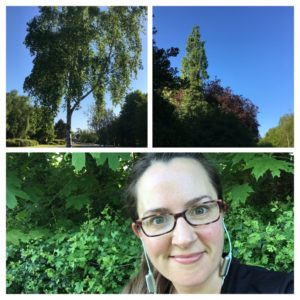 It was sunny on my not-parkrun at least! 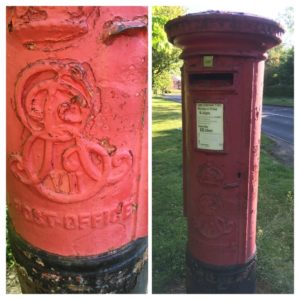 Danny on With Me Now had mentioned postbox cyphers, and I had thought that all the ones near me would be ER ones, but by chance I glanced at one on my run and it turned out to be an Edward 7th one (I had to google it when I got home because I could make out the VII but not really work out the letter shapes). 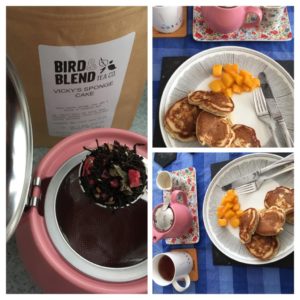 At home Mum usually gives me my own mini pot of tea on a tray (everyone else has coffee) and also my own milk jug, which has turned into a bit of a joke with my dad and brother trying to use it without my mum seeing…. so of course I had to replicate this too! I had some Vicky’s Sponge Cake tea (black tea with raspberry)- yummy. Andy joined me for birthday pancakes. I felt very lucky because despite the lockdown, lots of people had sent cards and messages (including my absolute favourite – a video of my niece and nephew singing happy birthday to me), and someone sent me some beautiful flowers(in the top picture)- they even came with instructions on how to put them in the vase so that was an enjoyable activity to do. The Post Office did sterling work delivering some Hotel Chocolat hot chocolate sachets and the Fearne Cotton Happy Vegan book (it even has a recipe for vegan French Toast!). Andy got me a card themed perfectly, with someone wearing a Stitch hat and eating a Dole Whip- the BEST Disney snack (officially- voted on by DFB!). As with so many things, actual outings are postponed or cancelled- we had got ourselves tickets to see Queen as a sort of joint birthday thing, and that’s now been put back to 2021. Andy got us tickets to see The Killers- it should have been this June but it’s now in 2021 too. For both of our birthdays my parents had got us tickets to a comedy show in St Albans (next week- currently being rescheduled)- we were going to go out for dinner together and then go to the show.  We shall have fun next summer. So that I had something to open Andy gave me a pack of those wafers from Austria- I love them and we have been re-watching Friends and there is always a box on the counter- he must have been listening because I now have a 12 pack-one a month until we see the band apparently! Not sure they will last that long! 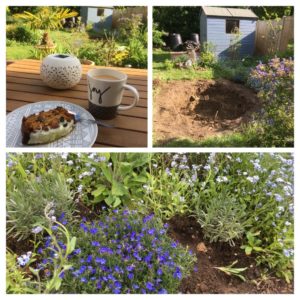 It was glorious weather so we spent a lot of time outside- Andy was digging a pond and I was pottering about with seeds and things. I’d made a carrot cake so we had a pot of tea and cake in the garden in the afternoon, and then I had a few calls (I love a Whatsapp video call) to my parents and Andy’s parents.

I’d gone for a Totoro theme with my t-shirt and hoodie, and requested that as my birthday film. 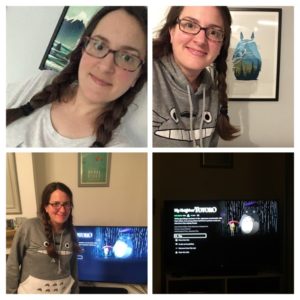 We watched the subtitled version and at the end I found out that they don’t subtitle the end credits- the song is very sweet and basically tells the story, so we had to then find the dubbed version. We then went down a bit of a You Tube wormhole, watching the Kimmy theme tune,  some random songify songs,  the Disneyland Paris Christmas parade, and finally  Wishes (the final one where all the crowd sing along). 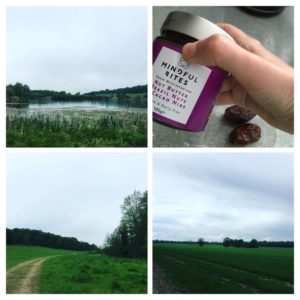 Dates + Nut butter shall always be the greatest food once back from a run.

On Sunday I went for my run over to Panshanger. I kept it a bit shorter though as we needed to do more decorating. Although most of the paths are wide, I got a bit stressed towards the end because I came across a few groups of people who just would not move. I always feel that it is polite for both lots to move- if I move to the left, please move to the right and show me that you are making the effort. I was ending up running a long way into the fields, where it’s all rutted under long grass, because people would not even step one foot to the side. Grrr. Also, the car park is closed but people are now parking in the laybys and along the country roads- it was a lot busier than I had seen it before. 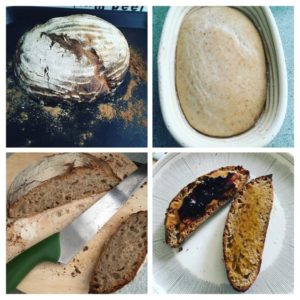 I’d made some more bread for us to have on Sunday. After lots of online reading, it turns out that the baskets for proving need to be sort of seasoned (heated in the oven a bit, or put in there are the oven cools). The rice flour seems to be helping too- it came out more easily but was still a bit flat. PB&J for one and honey for the other piece. We actually finished decorating the hall too! Well, I mean we have now painted the walls (and reached the high bits with a brush taped to a mop handle)- still need to do all the woodwork but at least all the sheets and mess can be cleared away. I also plucked up the courage to record a voice message and send it in to With Me Now- it’s my fave parkrun podcast, and it’s great that they are still keeping going despite parkrun being paused. They had asked for audio contributions for the last few weeks but I didn’t feel brave enough, but then they asked again to hear from different people so I had a go (had to download a new app and everything). 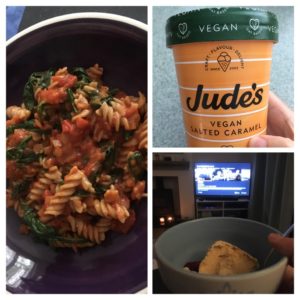 On Sunday night Andy made a lovely but rather spicy tomato and spinach pasta, so to cool down I had some of this delicious ice cream (it’s oat based and sooo creamy) with some berries, and we started watching the new series of Bosch. A good end to the weekend.

What is your record for the longest time spent decorating one room? Seeing as we started in August 2019 we are probably going to reach a year before we properly finish! Have you had many things postponed or cancelled?  I don’t mind so much if things are postponed, we have a long list of those (seeing the Athletico Mince podcast being filmed, Rhod Gilbert comedy show, seeing Ash, Queen) but a couple of things have just been cancelled (including Nick Offerman- from Parks and Rec- he was going to be brilliant) and that’s a shame because you don’t know if you will get another chance, whereas at least with postponed things you can still look forward to them eventually. Have you started on postbox bingo? I’ve seen a few GR’s on my walks so I am going to do a run to see lots of them too.

4 thoughts on “A lockdown birthday”