While I really appreciated the routine of a run and then the parkrun quiz, I am much happier now that I can go running with my dad instead, and that has replaced the quiz for me in the past two weeks. I did think I’d go back and do the quiz at some point, but have not got around to them yet.

This week parkrun launched (not) parkrun, where you can add your time to the results page (a maximum of one 5k per day, wherever you like), and then each week your fastest 5k time will be added to your home parkrun, and they even publish and send out the results.

Dad had mentioned that he wanted to run a 10k, but my brother wanted to run a 5k, so I arranged to head over there early, the two of us would run a 5k loop ending at their house, and then my brother could join us for for the second 5k. Dad had planned out the routes- the one we ran went through farm fields and tracks, and then the one with my brother was the same as last week, heading to Jersey Farm parkrun to do a loop of the course and then heading back.

It was so enjoyable to be out there- the weather was good, the sun was shining but it was cool in the shade, and it did not feel like we had run a 10k, it felt more like a 20 minute run. It just shows how much difference company can make. 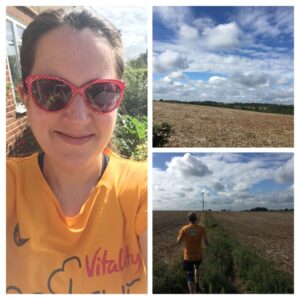 Afterwards we sat in the garden (at three separate tables) and had breakfast- just a lovely start to the weekend. I added my time for the first 5k to the (not) parkrun page, although it was a bit hard to work out how to submit my time.  I thought it would be a link on my profile, but it wasn’t- I had to log in to the detail change part and do it somewhere there. I really liked getting the results email on Sunday night, and looking down the list I recognised a lot of names (mainly from my running club). Of course it is’t as good as parkrun, but it does get closer to the experience, especially now I can run with Dad and Tony, have breakfast together after and then get an email. 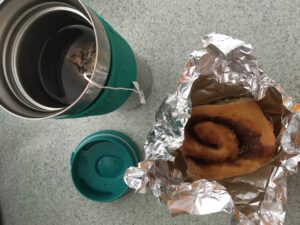 Once home we did a few bits outside- painting the trellis that is going on top of the fence (we did 2 on Saturday and 4 on Sunday- they are quite fiddly). I also did the second coat on a picture frame, planted out a few more plants from the greenhouse, and a spot of weeding, as well as taking time to enjoy some of the elderflower cordial made last weekend. So refreshing. 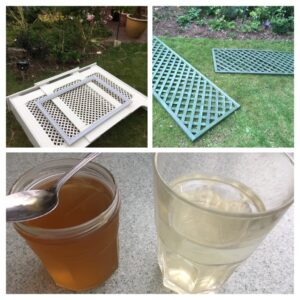 It’s in a jam jar because I didn’t think about needing glass bottles until I was finished making it.

We decided to have waffles for dinner on Saturday- my favourite savoury choice at The Waffle House is the hummus and avocado one, so we did a sort of imitation, topped with hummus, avocado, rocket, sundried tomatoes and sweet chilli sauce. So tasty but very filling and we definitely needed a walk after that. 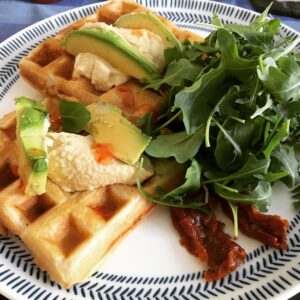 On Sunday morning I went for more of the WGC 20/20 route, doing a mostly out and back for 10 miles. A lot of the route was in the woods, and I made it nearly to the top end of town so I think I’ve done nearly half the loop now. The whole route is 13 miles, so I think I might head out in the other direction at some point to try and see where it goes. 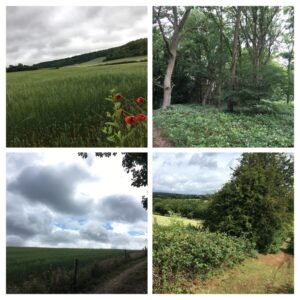 It was fairly overcast but brightened up by the time I got home. 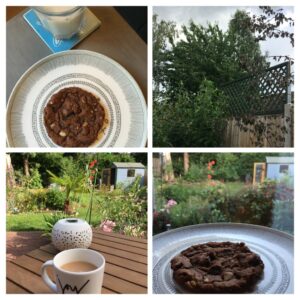 The rest of Sunday was spent pottering around at home- I made some cookies (the delicious Pret chocolate almond butter ones), painted the other trellis, had tea in the garden and watched a bit of TV. We watched the documentary about the Salisbury Russian poisoning which was really interesting. I really liked how they portrayed the main characters, particularly the head of public health who kept doubting if she was capable of doing it (instead of the usual characters who are always so confident in their abilities).

Have you joined in with (not)parkrun yet? Or have you sorted an alternative Saturday routine?

2 thoughts on “The first (not) parkrun”