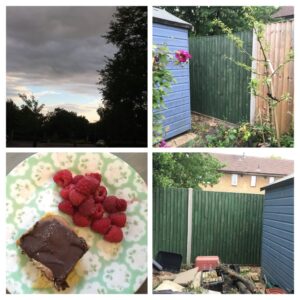 I did some more fence painting. My mum had made caramel shortbread so when we popped over for my dad’s birthday she gave us some to take away- delicious with freshly picked raspberries too. 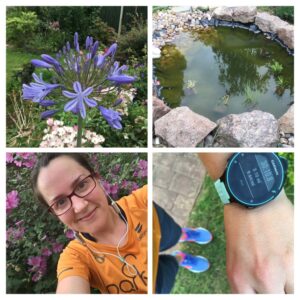 On Tuesday morning I decided to have a go at another (not) parkrun, as for the last couple of weeks I’ve logged my Saturday time but we have been running together and chatting, so I thought I’d see if I could go a bit faster.  My runs on my own are enjoyable headspace time, and I tend to plod along at between 10 and 11 min miles- perfectly good but I do miss the push I get from parkrun to give me a little bit of (relative) speed. I did a mile warm up, saved the run and then started a new run.  I had to slow down a couple of times when crossing roads as there were cars coming, and I got to 3.1 miles just over 30 minutes (30:11). Much quicker than the 34 ish mins we’ve been running recently. I am not particularly motivated by time, but I fancied a different focus. I tend to do the same route in the mornings because it’s fairly quiet, so having something else to think about is quite nice.

Our new pond plants arrived so we put them in- literally the easiest gardening ever! They came in special baskets with special aqua compost, and you just read the label to see how deep they needed to be, and popped them in. Done! (The digging and lining of the pond was not so easy!) 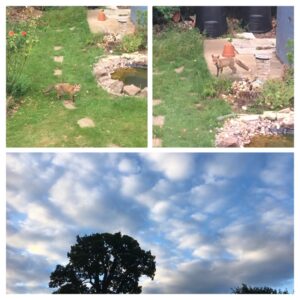 I often hear the foxes at night (and see the “presents” they leave for us) but on Wednesday morning when I was getting changed for my run I saw a couple in the garden. There were some beautiful clouds on my runs too- different shapes and patterns each day. 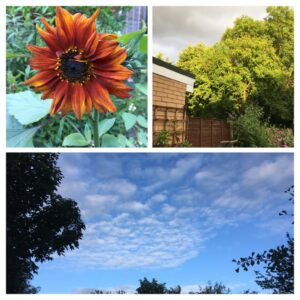 Thursday morning the clouds were similar in shape but much finer. Also one of my sunflowers bloomed- it reminds me of marmalade! 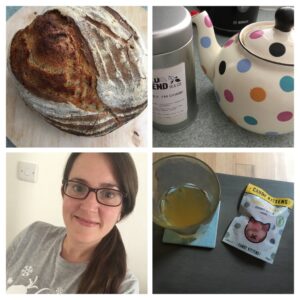 On Friday I was very exited because Hamilton was going to be launched  on Disney + ( a recording of the Broadway version).  I was up early making bread so we could have a fairly early dinner, and then we settled down to watch it, with some iced tea and sweets. I really enjoyed it- I wasn’t sure how well the energy and music would come across, but it was as gripping and enjoyable as the stage show. Although I did not appreciate the close up of King George III with the spit going down his chin! I also really liked that they had an intermission (although only one minute- we had to pause it!). 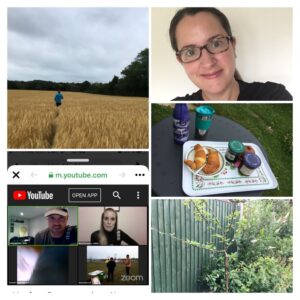 On Saturday I drove over to home and my brother met us to have a run together. We ran on a farm loop that I’d run with Dad a few weeks ago. This time we had to wait because one of the paths goes through a field and there was a bit of an antsy horse- thankfully there was someone nearby who held the horse while we ran through. The path then goes through a barley field and it was very deep at times. Then it was home for breakfast in the garden, more fence painting and then watching the With Me Now pod link up to parkrun restarting in New Zealand. It was so enjoyable to watch, and I just love that wherever you are in the world, parkrun has the same template. It seems like it will be a long way off for us in the UK (we are still having more deaths than when the lockdown was introduced) but it will be ready for us when we are allowed.

On a side note, parkrun announced that the New Year Day Doubles would be no more, and predictably some people have taken the news very badly. I have loved taking part in them, but this year the attendance figures were so huge (some event had triple their normal numbers) and with that comes things like inconsiderate parking, which can jeopardise the future of the event.  We still get an extra one on that day, so although it’s sad to see the doubles go, we should all be happy that there can still be an extra one (and hopefully by 1st January 2021 parkrun might be back?).

I also made some of the Pret almond butter chocolate cookies (honestly, the best cookies ever) and we did a bit more of the lego Disney castle.

In the evening we watched the film Irresistible, which was a sort of comedy written by Jon Stewart about an election in a small town in the USA. It was quite good but a bit depressing about how much politics relies on money.

Then on Sunday I went off to run the final part of the 20/20 route. I thought that the path would still be flooded, so I tried to work out where it would meet the road. Handily someone in my running club has been completing the route fairly regularly, so I looked up her Strava map which helped me a lot. 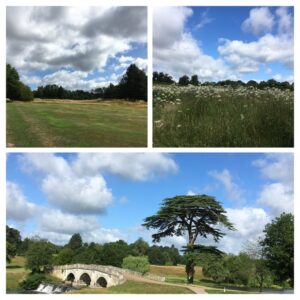 After going through a lot of overgrown paths and around a little village, I was into the golf club at Brocket Hall. I’ve only been there for afternoon tea before, and the grounds always look so beautiful but I didn’t realise that there was a public footpath there until now.

I got a bit lost in the golf course as there were lots of public footpaths criss-crossing the course. Because the route is both clockwise and anticlockwise, there are always  two arrows, so it’s good to look and work out which direction you should be coming from to help work out the angle. Anyway, the last arrow I saw directed me up and to the right, and the road went this was for a bit before bending left, so I followed the road. I saw a few more footpath signs but no 20/20 signs, until eventually I reached the edge of the golf course and some woods. There was a map and when I looked I was on the bottom left when I should have been the top right. I think I added around a mile on! I retraced my steps to where I’d last seen the sign, and probably about 20m further up was a post on the floor, in the shade of a small tree. No wonder I hadn’t seen it. There wasn’t anyone around to tell though, as the post would need putting back up again. 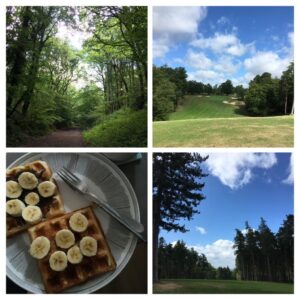 The signs exiting the golf course weren’t great either, and I only found the right way because I knew I should be heading to Sherrardspark Wood across the road. Apart from that though it was all fairly easy to find (and that’s taking it from me- I do get lost a lot). In the summer holidays I am going to run the whole thing and I’m really looking forward to that as it’s lovely and varied.

Then we had waffles and finally finished painting the fence- hooray! The last couple of panels were a team effort with Andy holding back the big plants while I squeezed in the gap and painted while trying hard not to get covered in green paint myself!

Andy’s parents then came over and we walked down to the hospital, because as part of the celebrations for the NHS birthday a spitfire was going to be flying over several local hospitals. It was leaving Duxford at 4.20 and apparently would be over the QE2 at 4.28- it was pretty much bang on time. It had “thank u NHS” written on the bottom, and did a couple of loops before flying off to the next location. Lots of people had come out to watch (the most people I’ve seen in months) but I was very impressed with how everyone stayed apart. Once home I realised I was pretty hungry so had a little afternoon snack of biscuits topped with cheese and lingonberry jam, and cherries. 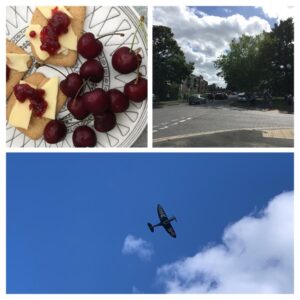 In the evening Andy was watching the football so I decided to watch Frozen 2 while painting my nails- I’ve not painted them since lockdown began because I’ve been doing decorating and gardening, and there doesn’t seem to be much point in doing that if they are going to get chipped. So in celebration of finally finishing painting the fence, I thought I would treat myself. Andy even brought me up a cup of tea and a cookie at half term- perfect. 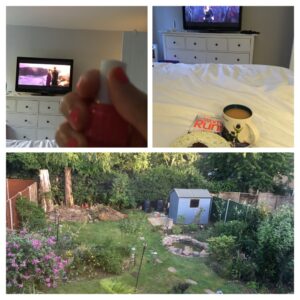 Such a lovely end to the weekend.

Have you seen Hamilton? What did you think?

Have you completed a NYDD before? And what do you think about them going?

6 thoughts on “Attempting to speed up for (not) parkrun, and Disney+ excitement”