A few years ago we were in Montreal and came across a big Christmas in July celebration, with giant inflatable animals, food trucks, decorations and so on, and I really liked that idea, but often we are on holiday on the  25th. This year however we were home, so I decided we would have Christmas in July. 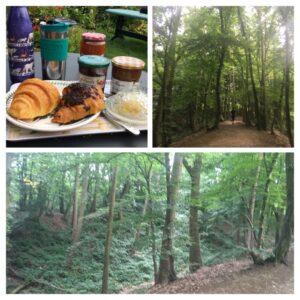 Of course Christmas Day starts with a parkrun. Dad had planned a route to a place he had only discovered through cycling in lockdown- an old gully with paths along the top and through the bottom- it involved a bit of scrambling at one point as it was a steep climb to get back out again. My brother had been to Simmons to get croissants for breakfast (I’m still bringing my own water and tea). It was forecast to rain but it held off so we were able to sit in the garden for a few hours after.

Once home I showered and put on a Christmas t-shirt- this one has a gingerbread man on it (and unlike my penguin t, this is most definitely a Christmas one). 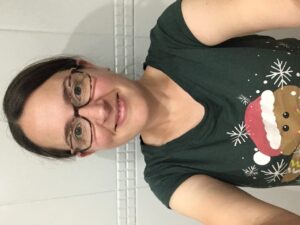 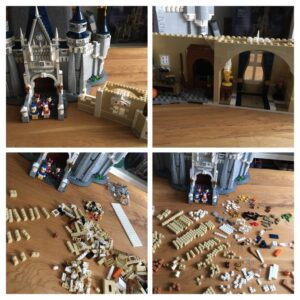 We did a big more lego, as that seemed a festive thing to do. 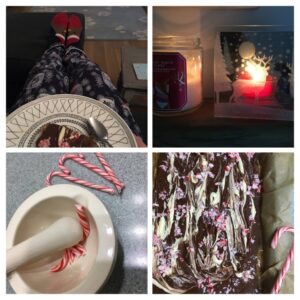 Then in the evening I put on some candles and we watched a film- although not a Christmas one (Andy drew the line there)- we ended up watching the Eurovision film, which was gentle and fairly funny.

On Sunday we were up early as we were going to walk the WGC centenary walk, which is around 20km, but as it starts from about half a mile from home it is basically a half marathon. 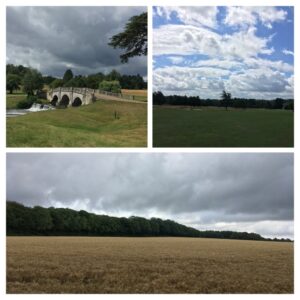 The weather was forecast to be “sunny intervals” and not too warm- perfect. And it was, but then some big clouds appeared later on (top right to top left!). We had taken bananas and water with us, but not rain coats…

After around 9 and a half miles it started to rain quite hard, but luckily we were close to a railway bridge so we sheltered under there for a few minutes and then it eased off.

At about 10.5 miles we were coming up to the final golf course and it started raining heavily- there was no shelter around and we were soaked through after a few minutes. A couple of girls asked the way as they had got lost on the golf course- the posts with the signs were hard to spot with the rain coming down. The final part was through the woods, and then it stopped raining and my clothes started to dry off, but as soon as I got home I needed to change into something dry. It ended up being 13.6 miles, and we walked it in just under 4 and a half hours.

After lunch and a shower Andy was watching the football so I watched some Disney+, opting for Cinderella. I don’t think I’d actually seen it before. Princesses were not my thing when I was little, and my favourite Disney films were Jungle Book, The Lion King and The Little Mermaid (although she is a princess, I loved the sidekicks and songs more). It was just over an hour and just what I fancied – totally easy watching. 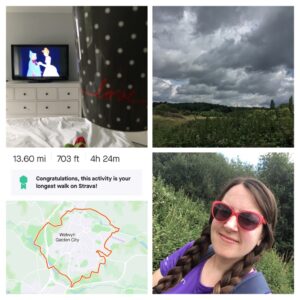 After dinner we had a Christmas pudding- one of the Waitrose ones with the clementine in the middle- and used one of our film vouchers to watch Onward, which I loved but why Pixar do you tug those emotional strings so well?

Have you ever celebrated Christmas in July?  Do you like long walks? We sometimes have fairly long walks on holiday- my most memorable one was a 10 mile walk in Glacier National Park to see a lake of icebergs- it was amazing but the whole time I was really jumpy in case we saw a bear (we didn’t on that walk, but saw plenty of bears in that park on other days).

2 thoughts on “Christmas in July! Plus walking a half marathon.”