Every year there are a few classic film and TV shows that we watch at  this time of year, and with all the other stuff going on, some Christmas movie escapism was what was needed, especially at around 4pm on a Sunday when it was dark outside, I’d make a pot of tea and settle down. 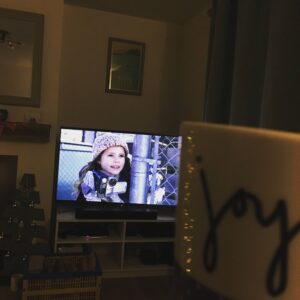 First up, the classics, which we tend to watch closer to Christmas Day.

The Snowman. I cannot remember a Christmas where I didn’t watch it, and just the music makes me feel calm. Saved for Christmas Eve.

It’s a Wonderful Life. We first watched this on Christmas Eve when we went to Boston and New York over Christmas- it was snowing in Boston and freezing cold, and after we’d been outside all day we put the TV on and watched it. It’s now a Christmas Eve tradition.

Home Alone. Another classic that is probably reserved for the day before Christmas Eve. Although I still can’t look at the big spider, and the bit where the guys sit in their van and know the timings of all the lights still freaks me out.

Elf. I mean, is there a happier film than this?

In Bruges. Now, some might argue that this isn’t a Christmas movie, but it takes place in Bruges in December, and it’s all snowy. It’s got a sort of Fargo feel to it- very dark humour. But a nice change to all the super sweet Christmas bit going on.

Last Christmas. Now, when I heard about this last year, I could not quite believe that there had been a film created around just one song. I do quite like the song (and the Jimmy Eat World cover of it), but I mean, how do they make a film of it? It was billed as a romantic comedy (a genre I am not a fan of) but I think the podcast Pop Culture Happy Hour hit the nail on the head when they said it was a bit more like a Christmas Carol, and should have been called A Christmas Lesson. It was fine, but I feel like they used the song too early (and also way too literally). Not sure I’d rush to watch it again but it was quite nice seeing London looking all festive, so if I came across it on TV I might re-watch.

Happiest Season. This was quite sweet. A young woman with a plan to propose to her girlfriend while at her family’s annual holiday party discovers her partner hasn’t yet come out to her conservative parents. There were some good characters (I could have happily seen more of Dan Levy’s character) and it was perfectly watchable.

Noelle. This had Elf vibes to me, with the Christmas North Pole village just looking so festive and pretty. I wished that Anna Kendrick sang a bit more in it, but I’d happily watch it again.

Godmothered. New to me (I think it was out last year?), it’s not totally Christmas related  with a fairy godmother-in-training trying to prove that people still need fairy godmothers, but as a lot of it happens in Boston around Christmas time there is enough festive goings on to make it part of the list. I did wonder at times who the target audience was, as there were some jokes that I think would go way over some heads.

The Christmas Chronicles. Andy liked this more than I did. I thought it was quite funny, but again who is the audience? I would think it would be too scary for little children, and it was a bit predictable. Anyway, I might watch it again but there would be many more in front of it on the list.

Community Christmas Special. Community was a great comedy show, set in a community collage, and their Christmas special has some great songs and is just a feel-good watch without being saccharin.

Gavin and Stacy Christmas Special– the original one, not the one from last year.  It is full of classic lines and captures the essence of a family Christmas.

Home for Christmas: This is a Norwegian show on Netflix, with a second series this year. When we went to Oslo last November we saw loads of adverts for it, and so started watching it when we got home. The first series begins at the start of December with the main character lying to her family and tells them that she has a boyfriend, and that he will accompany her to Christmas dinner. The series follows her in a Christmas countdown as she tries to find a partner, and it’s very festive (she rides a sledge up and down her local high street, there’s some skiing, lots of gløgg- Scandinavians do Christmas properly) and it’s quite sweet.

Lots of podcasts release Christmas specials, but the one that tops them all is the Adam and Joe one. I used to watch their show when I was babysitting, and then when we moved to Hatfield,  listening to their xfm show used to be our Saturday routine (and listening to their podcasts kept me company on my runs back when there were not many podcasts about). Adam Buxton now hosts his own podcast, but each year he’s done a festive special with Joe, and hooray, they are still doing one this year!

Which are your favourite Christmas movies or TV shows?