I am someone who needs to be outside and needs to be busy. I am happy pottering around at home, but the idea of a pyjama day is really my worst nightmare ( I mean, not as bad as big spiders, but you know what I mean). I am happy to watch a film in the afternoon if I have been out and about in the morning. I don’t run every day- usually 4 times a week- but I do have a walk or some sort of activity each day, and my 10,000+ per day step streak has been going a few years now. So when I got that notification of having to stay home, it really did feel very tough.  I had so many messages from friends and family checking how I was going to cope, and even my dad asked me if I was going to head out at midnight when the isolation ended. So I have a reputation for a reason.

Anyway, it was OK. It felt like a shame because it was my holidays (from work) and on the one hand I was trying to enjoy them, but on the other hand wishing the first week away so that I could actually get outside properly. The fact that our area went into Tier 4 as soon as it was invented (this was predicted of course that they can add on more tiers, just like with the GCSE’s now being numbers, they can add 10 in a year or so, like they did with the old A, A*, A** etc.), so plans to meet up outside on walks with my parents and with a friend were not allowed anyway, but if I wasn’t isolating I would still be allowed out to exercise each day. 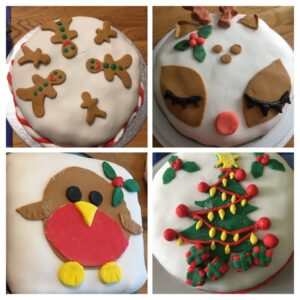 A gingerbread man cake for my brother, our cake is the reindeer, the robin for my parents and the tree for Andy’s parents.

I know we are so lucky to have a garden, and so I started each day with a run in the garden. Garmin/ Strava are not fans of tracking runs so close to the house, so it would take me a long time to get to 4 miles (I had signed up to run 100km before Christmas, and that was what I needed to hit my target).  At least with a few podcasts the time went fairly quickly. I soon wore a path in the grass though, and by the final couple of days I had to stick to the patio and running down the side of the house because the grass was so boggy (we had a lot of rain).

Then I got on with work, exciting things like cleaning, and then Christmas prep such as wrapping gifts, decorating cakes and baking. I would sit down for a bit at lunch but generally try to keep on pottering about because I wanted to sleep well, and I don’t sleep well if I’ve been sat around all day. 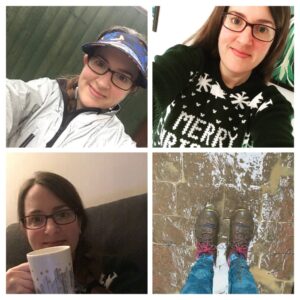 My trail shoes were so muddy, and on the final couple of days I ran in my gardening shoes (old running shoes) because I could not even get my trail shoes on. Cleaning them is on my list! 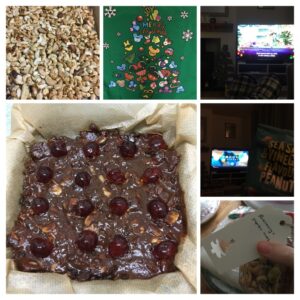 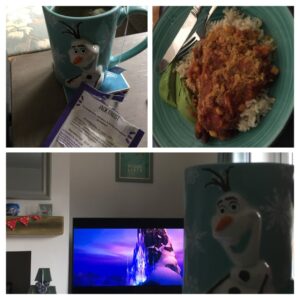 Delicious veggie chilli had for dinner one evening.

My tea advent calendar was a nice focus each day too. One day I had a fair bit of work, and the tea was called Jack Frost (I think spearmint and coconut), so I watched Frozen while I got on with the work. Elsa’s palace felt very fitting! 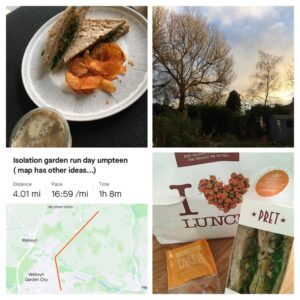 Usually Strava looked like a scribble in my garden, but one day it decided that I had run in a straight line away from home. I promise I didn’t. It even had ben running over a lake. Impressive powers. One day we got a Pret deliveroo for lunch, because I love their Christmas sandwich (something like nutty roast or stuffing with roasted pumpkin, cranberry sauce and other goodies). 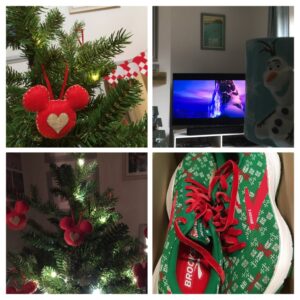 On payday I had treated myself to the Brooks Christmas trainers- I nearly got them last year but didn’t, and then this year on payday decided to treat myself. Well, of course they arrived once I was isolating and the garden was way too muddy for them. At least I can wear them next year! 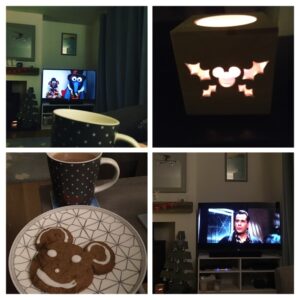 Of course I had some films to keep me going too. 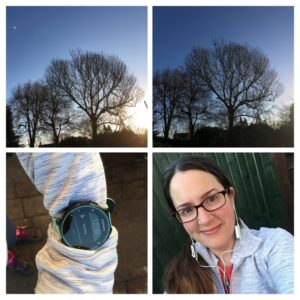 For most of the week the weather was fairly rubbish, but in Christmas Eve we were treated to beautiful blue skies and frosty winter weather. 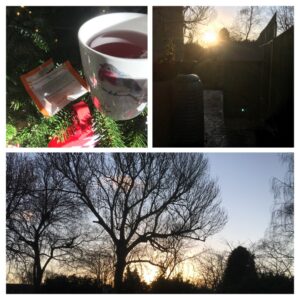 I made sure one of my jobs that day was to top up the bird food in the garden as that’s not a fun job in the rain. 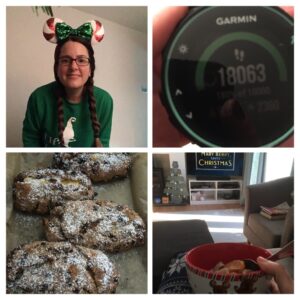 Not a bad step count either!

I made some “mini” stollen (they were not that mini), had breakfast watching Mary Berry’s Christmas show, and also got ready for a zoom quiz later on (had some stollen during the quiz). 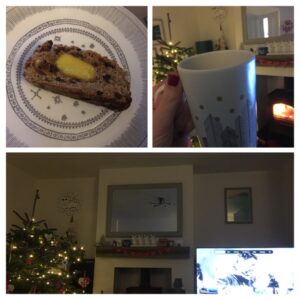 On Christmas Day of course I had to wear my Christmas leggings. 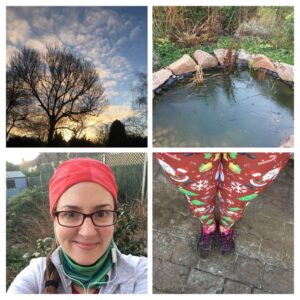 It was another frosty morning with our pond being completely iced over and such a pretty sky. After showers and breakfast we swapped presents and listened to some Christmas podcasts, and then got on with lunch prep. 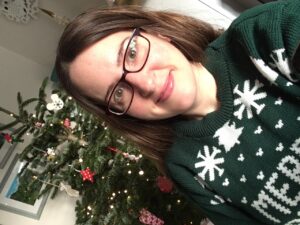 Home Alone jumper on of course- this was my first ever Christmas jumper from about 7 years ago I think! The collection has grown since then.

We had always planned for it to be just the two of us on Christmas, so we had the right amount of food which was one good thing. We’d got an order from Cook a while back, and then topped it up with a few other bits. We had their lovely vegan squash and nut stacks, with some cranberry stuffing, roast potatoes, veg and cranberry sauce (Andy also had a few pigs in blankets). I’m not usually a fan of roast potatoes but they were very tasty, and I don’t think I’d ever had stuffing before. I think I’d always associated it with meat because it is meant to get stuffed in the meat (?) so just never tried it. We even had veggie gravy which again I don’t think I’d ever had because I don’t trust that it would not actually have meat in it (if I was having it somewhere else). Then I did feel a bit sad because the weather was so nice and usually a walk after Christmas dinner is just such a good part of the day. In the end Andy went out for a walk and I walked around the garden listening to a podcast. I just knew I’d feel better after walking instead of sitting around, and it was good to get some fresh air. 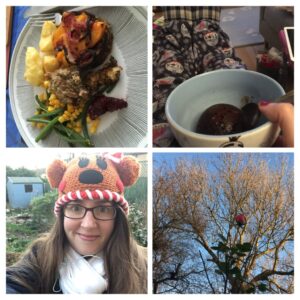 Weirdly our rose is still flowering, and it did look so pretty against the blue sky. We were both still full from dinner hours later, so I think we had a few nibbles of crackers and then had a Christmas pudding with a bit of ice cream. We did a video call with my parents, and watched some Christmas  TV. All very chilled out and enjoyable. 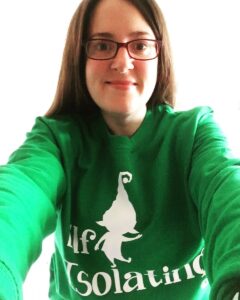 I ordered this jumper from Etsy pretty much as soon as I got home because it just seemed perfect.

And then, my self isolation was over! Hooray! I shall save the freedom for another post!

What did you have for Christmas dinner? Did you have to change plans?

Have you had to self isolate yet? How do you think you would cope? At least I know I can manage it, but of course it could easily happen again, so I am not sure how I’d cope a second time around.

2 thoughts on “A week of self isolation”