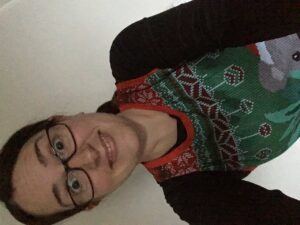 This was the face of someone very excited to leave the house for the first time in however many days! Boxing Day and I was allowed to go outside our front door! 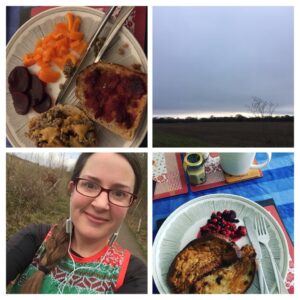 I didn’t head out too far (4 ish miles) as we had planned a walk later, but it was so good to have views and to be running in a straight line. I passed a handful of runners and all of them said good morning back- hooray!

Once home we had the French toast from the Fearne Cotton Vegan book- using some amazing Mindful Bites vegan panettone- such a tasty breakfast.

I happened to be on facebook when a notification popped up about With Me Now going live, and so I watched that. They were down in Hove along the Hove Prom parkrun route (one of the people who sometimes presents it lives down there so they did a little link up). It was so nice to see the parkrun route. It was my first UK tourist parkrun and I’ve run it 6 times, so I spent a bit of time reminiscing about our various Brighton trips.

One of the things I had planned to do before Christmas was go on a walk near the town centre, as when I’d run there I had seen some really pretty Christmas lights, so once it started to get dark we headed out to walk around (a bit of my snowman running route). Once home I attempted to make myself a version of the Pret Christmas sandwich as we had some bits left over- stuffing (I think their version is nut roast but our stuffing had nuts in), cranberry sauce, roasted pumpkin (the final homegrown one from our garden), Leon vegan burger sauce and pesto, with some peppers and beetroot on the side. It was very tasty. 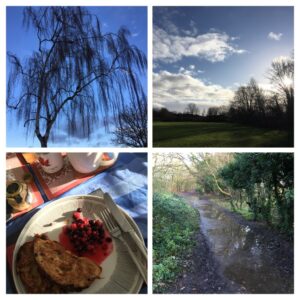 On Sunday the weather was beautiful! I had another run (8 miles finding lots of flooded paths) and then the same breakfast. 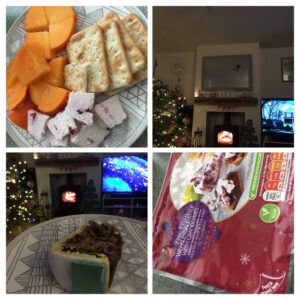 I had bought some vegan “Christmas cheese” (wensleydale and cranberry) from Sainsbury’s and it is really good with a proper crumbly texture, so that on crackers with persimmon has been a good lunch. We usually start our Christmas cake on Christmas Eve, but were too full this year (and then had Christmas pudding on the day itself) so finally got around to trying it. I’d used a new recipe so I was really pleased with how tasty it was. 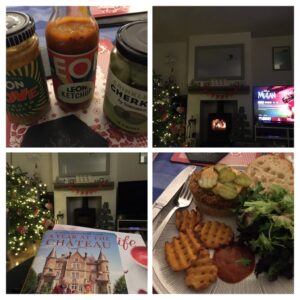 Andy got me the book about Escape to the Chateau, (love their TV show) so I’ve been reading that most days in the afternoons. It covers their first year, with a chapter per month, and both of them write in each chapter so you get both their perspectives. In case you were wondering, it it sounds like a lot of work!

We watched a few films- Soul (which I enjoyed and didn’t make me cry as much as other Pixar films tend to), Mulan – hooray for girl power (which was really different to the animated version instead of a shot by shot remake, cough The Lion King), and some classics such as Pitch Perfect. Plus catching up with podcasts of course- the classic Adam and Joe Christmas special, as well as the Off Menu festive editions. 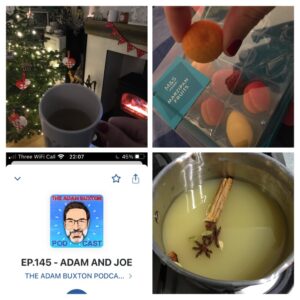 I was given a fair few chocolates and treats from work, and by far my favourite were these marzipan fruits- sooo good. I am going to be doing veganuary this year, after probably being 90% vegan for a long time, so anything that isn’t vegan has been passed over to Andy which he is fine about.  We also made some spiced apple juice for a couple of evenings- it reminded me of Christmas market visits. 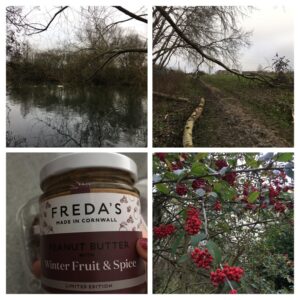 This peanut butter on a date is the best snack after a run.

On Tuesday I had a run of two halves. I was going to meet a friend for a walk at the lakes, but she was unsure if the paths would be OK for a buggy, so I said I’d run down and take some photos. The final club challenge was for a run before 9am, so I did a 5k to the lakes, stopped my watch (for the challenge) and then walked around taking photos. I then ran home a different way, for a 10k. While I was running I was trying to remember how many miles I’d run in December, because all of my other months this year have been 100 miles or more. When I got home and checked, I only had 6 miles left, so I decided to do that on NYE. 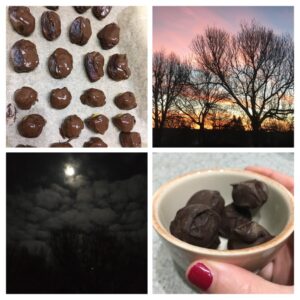 I made some snacks to have while Andy is working his way through the chocolates- dates filled with peanut butter and topped with dark chocolate, and some marzipan rolled into balls and then dipped in dark chocolate. I am trying to make them last! We were treated to some amazing bright moons, and some beautiful sunrises in the mornings too.

Sadly my friend couldn’t make our meet up as she felt poorly, but I decided to walk there anyway as I had to visit the bank in town and it was such a beautiful day- I need to make the most of being allowed to leave the house. 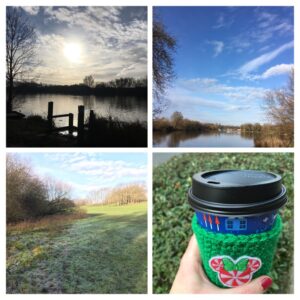 Caffe Nero was empty and I was freezing so I got myself a peppermint hot chocolate for the walk home, with my Disney candy cane cosy. Funny thing- last year I got these for a few people as I think they are fab gifts and mean that you never use the cardboard sleeve in coffee shops- saving on waste too. Anyway, one of my friends didn’t know what it was for, and so put it in a drawer, and it was only when another friend sent a photo to our group chat that she realised what it was for!

In the afternoon I met my mum for a walk. There is a place she’s been with my dad and they keep seeing a barn owl there, so we met just before sunset (well around an hour before, to give us time to have a walk). We were so lucky to see the owl hunting and then catching something, even being chased by a crow. 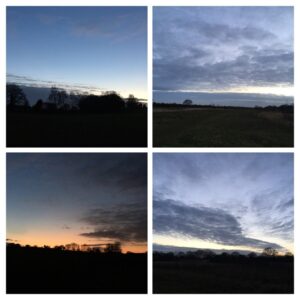 It was glorious to be outside with the sun setting. Nature is really the best tonic. 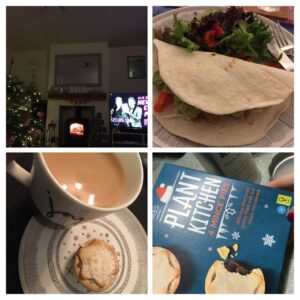 When I got home I was so cold- actually walking was Ok, but we chatted a bit at the end, so it was tea and a mince pie to warm up. We had bought tickets to a live podcast (Elis James and John Robbins) so we made sure to have dinner before it started. 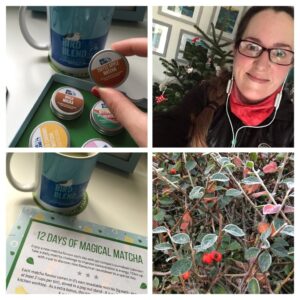 The final day of the year started with a run. In the end I did 6.5 miles to make sure that I would cross that 100 mile mark.  It was super frosty and cold and I ended up keeping my padded jacket on the whole time. Later on I did some jobs in the garden (like cleaning my poor trail shoes after the many many laps of our garden) and the bird bath was frozen solid (not just the surface).  We bought a matcha variety pack so had some of that to warm up.

We had a walk while it was still light (we have done this most days) and then I put up my ear holders (from Etsy) and Andy put up my big Lilo and Stitch poster. It was in our bathroom in Hatfield but the clip frame had warped a bit, and I had a hard time finding a frame that was the right size (in the end I got one from Habitat which arrived this week). I am really pleased with how it has turned out as it was a big blank wall before. 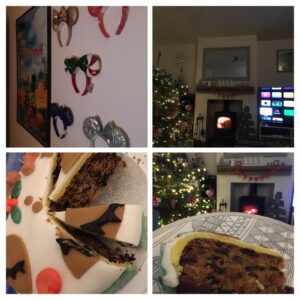 A final look at my Strava stats- every month over 100 miles, whereas usually I might manage this for a couple of months. I think one year I was close to 1000 miles and another I just managed it, and this year I did 1,406.

It’s quite pleasing but I am sure it won’t happen again!

Did you have a good new year?  Do you keep track of your miles? I must admit it’s my favourite Strava feature- I like seeing maps of my runs but I am never bothered by the pace, and having the miles add up over a month and year are very satisfying.

4 thoughts on “Freedom! Enjoying the last week of the holidays and 2020 total mileage”