The penultimate week of term arrived alongside lots of wind and rain. It really felt so much more like early April than late May. I keep feeling like we are coming up to the Easter holidays not the May bank holiday!

Our evening walks were squeezed in between torrential rain showers and rainbows.

I did my standard 3 morning runs, plus yoga on Wednesday, and I think I had a dry run on the Tuesday but that was all. 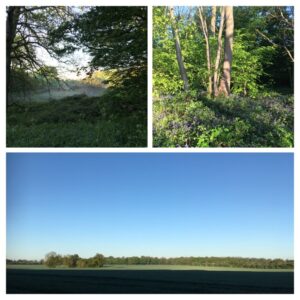 The leaves do look very lush when they are coated in water, now they are so green. They perfectly match the matcha too. Although I ended up with very soggy trainers as running through the narrow paths with tall cow parsley on either side meant that the water just poured off the plants and into my shoes. 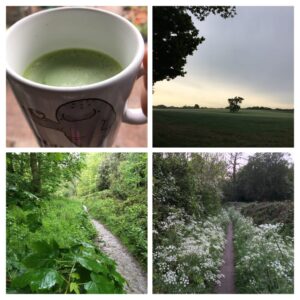 I’ve been slightly in love with the clothes from Magic Moon Club, and when they released a new princess collection I decided to treat myself with my April payday. 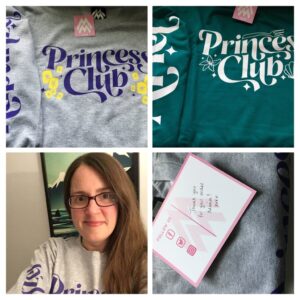 I went for Ariel (one of my fave films growing up, plus I love the green colour) and Rapunzel (Tangled is one of my fave more recent Disney films and fits with lockdown perfectly). The Tangled jumper was a lilac colour which just doesn’t suit me, so I used their “choose your style” tab which basically means you can choose any colour with any design on it- I went for grey as that would still go with the purple and yellow colour scheme. I was very pleased with how they turned out, and one good reason for the cold weather was getting to wear them! 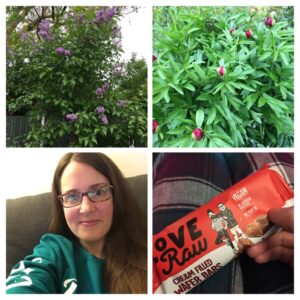 Lovely lilac in flower, and the peony covered in buds.

One evening I managed to get out in the garden for a bit, planting out a few things from the greenhouse, before I had to head in as it started hailing!

On the Friday we had the sad but seemingly inevitable news that parkrun was delaying the UK re-start date. A shame as legally they could have returned from March, they have been so sensible about aiming for the summer, and they’ve got research to show how low the risk is to all participants. It seems utter madness to me that I could (if I wanted to) go to a pub or a nightclub or go to an enclosed restaurant for a meal etc etc, but I can’t run with others in an organised way. On Saturday morning I went for a run and listened to the With Me Now podcast- it’s my fave parkrun podcast anyway, and I felt much more optimistic after listening to it. 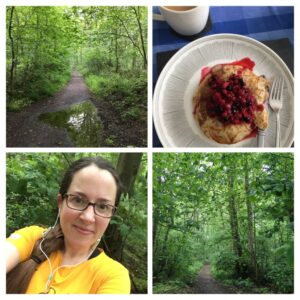 My worry is that parkrun are now tied to the so-called roadmap, and that if things like the Indian variant delay things (although, we all know that even though this gov said “data not dates”, they then released a load of dates and have ignored the data the whole way through…), then parkrun will be further delayed.  I also realised that it was one month until the restart date, so reasons to be cheerful! (Another good podcast right there). I had some pancakes with berries for breakfast and then got on with the fun jobs of cleaning and tidying- I like to get those out of the way early on in the weekend. 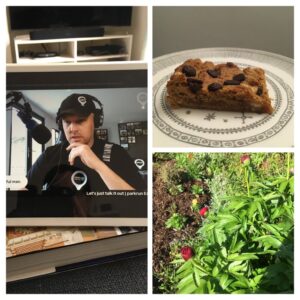 I made some vegan peanut butter blondies

Later on I watched a chat by Danny Norman (from WMN) about it, and again, felt more optimistic.

On Saturday night we felt like watching something cheerful and easy, and ended up watching School of Rock. I wasn’t sure how it would have aged, but it stood the test of time and was enjoyable. 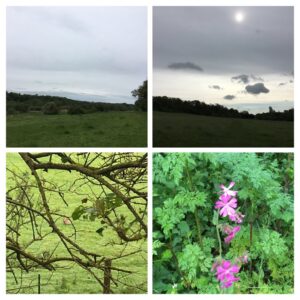 On Sunday I was up early for a 12 mile run (I really have to think that the Brighton half is going ahead now- they’ve sent out the info regarding the covid risk assessments with masks being needed in the start pens and so on). Anyway, I saw lots of rabbits and some pretty flowers. It was so sunny when I left but soon clouded over. Once home it was time for a quick shower and breakfast as we had to deliver some bits to the hospital ( family member- all OK now). 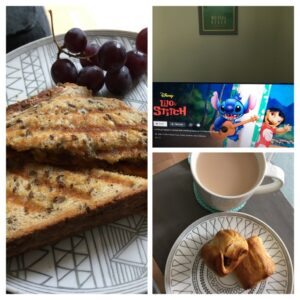 I treated myself to a toastie in front of Lilo and Stitch- I felt I needed something summery as the weather had just been a bit rubbish.

How do you feel about parkrun coming back?  Do you like a toasted sandwich?

2 thoughts on “Lots of rain this week, plus Disney jumpers to cheer me up”