I don’t know about you, but although I love a four day week following a bank holiday weekend, the week actually feels more manic. I think I try to fit in 5 days worth of work into 4 days which just is crazy!

I’d been for a long run on the Monday, and often I would have  rest day after that, but I wasn’t sure that I’d run on Thursday, so I thought I’d stick to my regular Tuesday and Wednesday morning runs. 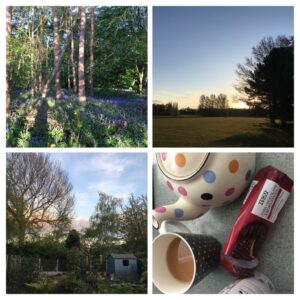 The light had been particularly beautiful on one of the mornings, so of course I could not resist and had to take some photos.

I had 2 staff meetings plus an additional department one (after school on Tues, Wed and Thurs), but I had to try and leave fairly promptly after it finished on Wednesday as I was off for my first vaccine appointment! The one bonus of getting older! 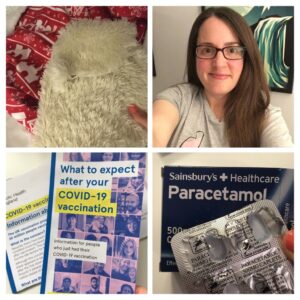 It was in the centre of town so I drove up after work. The whole thing was excellently organised (well done NHS and all the volunteers)- it felt a bit like a parkrun as the volunteers were all so cheerful. I am not a big fan of needles (I have fainted before and so get a bit panicked)- so when sitting in the hall and waiting my turn I had to try and sit facing ahead, as I could see the 5 injection stations to one side. The actual jab (I hate that word) was fine, but fairly soon after my arm started to get sore. They made me sit around for a bit before I could drive  home, but I was OK. I knew I wouldn’t be home in time for the actual yoga class, but I had said I would aim for the yoga nidra session, and ended up laying in bed while I joined in. The benefits of zoom! I felt OK when I went to bed, but woke up at around 2.30am with horrible chills and sweats and shivers. I also couldn’t lay on my arm (and I usually lay on my left arm to get to sleep, and then move all around once I am asleep). I took some paracetemol and that helped a bit but I didn’t sleep much.  Even a shower didn’t help (I have this if I get a bad cold- things touching the skin just feel uncomfortable). Thursday was a tough day as my teaching assistant was off, so I had to cope with my class on my own. Normally this would be fine, but feeling under the weather (achy stomach, headache etc) is very hard when you are working with little children. The meeting after work was a bit of a high pressured one too, so having to stay for that instead of just going home didn’t help. I was so glad to get home, and sit under a blanket on the sofa (I was so cold and shivery still). I think I managed to stay up until around 8pm, when I went to bed with a hot water bottle and more paracetamol.  Thankfully when I woke up on Friday I felt much better, with just the sore arm remaining. 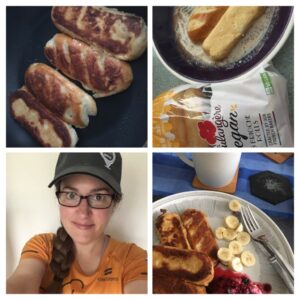 On Saturday it was pouring with rain- so miserable! I headed out for a gentle run to see how I felt, and I was OK. I think I felt tired from the lack of sleep more than anything. My arm was a bit sore, and hurt when I lifted it over my head, but OK when running.

I used some vegan brioche rolls to make us some French toast for breakfast, and then we spent the morning doing jobs around the house. I also finally booked a haircut- for June! I thought that after the first vaccine does (plus 3 weeks) you have some protection, so I would feel OK going for a haircut. I’ve not been since January 2020, and so it is long overdue.

Once that was done I watched TV in the afternoon (catching up on Taskmaster)- I really needed some chill out time. 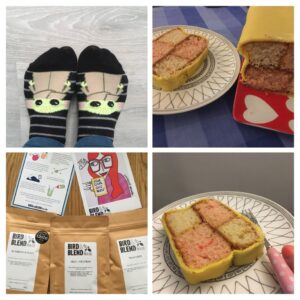 I made a vegan battenberg which turned out really well (check out sophie.bullimore on Instagram as she has some brilliant recipes).

On Saturday night we watched The Mitchells vs. the Machines, which was good fun and just what I fancied- nothing heavy going. 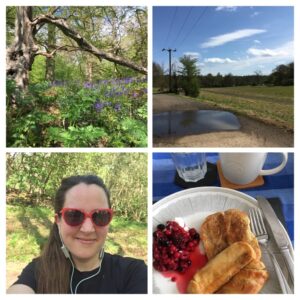 On Sunday I went for an 8 mile run, and then had more French toast for breakfast. This fuelled me for hours in the garden. I was given some trees for my birthday which needed planting in the back of our garden. 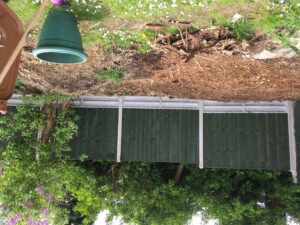 Before-The mound doesn’t even look that high, but it really was!

However, that bit of the garden needed sorting as it was covered in a pile of earth from when we dug out the pond, plus chippings from when the tree stumps were removed. I had to dig and rake and move a lot of soil. 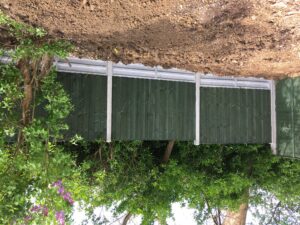 After- much flatter I hope you’ll agree! 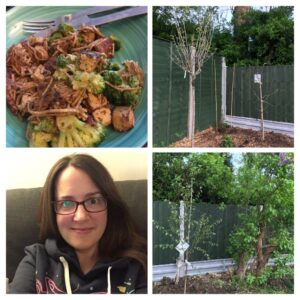 Noodles for dinner- so tasty!

I was pretty shattered after all of that, so treated myself to watching Tangled. Always a good choice. (Andy planted the trees once he had finished watching the Grand Prix).

After all of that hard work, we decided to have our dinner (yummy peanut tofu noodles) in front of the TV in the living room. In the end a productive weekend, but why can’t every weekend be a 3 day one?

Did you have a good bank holiday weekend? What is your favourite easy dinner? (the noodles are a bit of a faff really, but easy to eat in front of the TV) Have you booked anything or started to get back to more “normal” things yet?

2 thoughts on “One step closer to normality”