Each weekend that I go on a run, I feel that it’s the last chance to see all the autumn leaves, as loads of the trees are pretty bare now. Last Sunday was no exception! But to the week first. 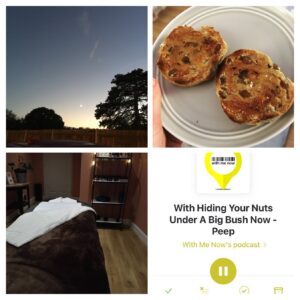 I am sticking with the morning mid-week runs still, but down to 2. It’s so dark in the mornings, although sometimes I’ve got a glimpse of the sunrise as I get home. It’s so dark in the evenings too, and so running then doesn’t have a huge appeal either. I am more limited to routes (there’s a cut through a park but I don’t like doing that in the dark even with my torch on) but I’ve sorted a couple of newish routes so it’s not too monotonous.

I’d booked a last minute massage after work one day (always needed, although I wasn’t as told off as last time so maybe the shoulder circles are helping). 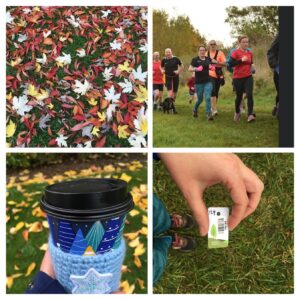 Onto the weekend- I was off to Jersey Farm with Dad. It was pretty good going, still not too muddy. We saw lots of OH ladies but had to head off fairly quickly at the end so couldn’t hang about and chat. As soon as my 249th (!) parkrun results were through, I emailed Panshanger to volunteer the following week. Dad was heading off for a week and I want to celebrate my 250th with him, so needed to not run for a week, but I didn’t want the plans to get upset (what if I didn’t finish at JF for some reason? what if the results didn’t come through? etc) so waited until I was sure. I had a quick breakfast at Mum and Dad’s before heading home, as they were heading up to York in our car, and I was having their car for a week (their car has a lower range so it’s fine for commuting, and they have taken it on trips around the UK but obviously it’s easier to charge less if you can).

Then the rest of Saturday was unexciting- some work, some cleaning… nothing to write home about but it all needed doing.

In the evening we watched Red Notice which was quite funny and a good Saturday night movie. 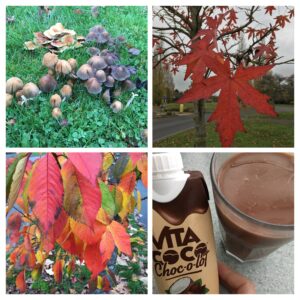 On Sunday I went out to run around the centre of town- I did a couple of laps and headed home after 8 miles. Of course I stopped to take more leaf photos! Once home I had one of the drinks from my vegan box- a chocolate/coconut water drink. It was really good, and perfect after a long run. My running mileage is getting shorter at the moment- I don’t think I’ll be near to 100 miles this month, whereas I’ve been fairly consistent with that up until now. But I think it’s good to have ebbs and flows, and once the holidays are here I can get back to doing some longer mid week runs and work up to the Brighton half in February. 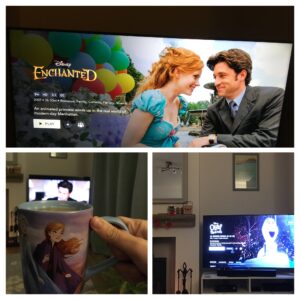 My treat for getting all of my work done on Saturday was to watch some Disney+ I went for another Olaf short (they are so funny), baked a couple more Christmas cakes and then sat down properly to watch Enchanted. I wanted to watch it last year but it wasn’t on Disney+ for some reason, but that has been rectified and they were advertising it as part of their Disney+ weekend.

Do you have films that you like to revisit?