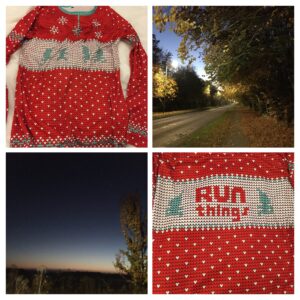 So, another fairly normal week came to an end. A couple of morning runs with a hint of dawn towards the end. Yoga on Wednesday evening, as good as always, and a few walks in the evenings too. I joined Run up 2 Christmas again, and this year bought the top (last year I bought socks), and that arrived in the week, although it was too mild to wear it at that point.

The only slight difference was that we had swapped cars with my parents as they were off up North and our car has a bigger range- we can charge theirs at home so it wasn’t an issue, but I am not that great with different cars. We’d had a practise swap a few weeks ago, so it was OK, but one morning it was frosty and I could not work out how to open the boot to see if there was a scraper…. 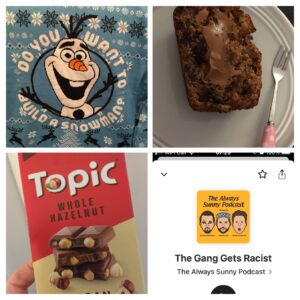 Frozen jumper, banana bread, a new-t0-me vegan chocolate bar from my wellbeing buddy, and excitement over a new podcast

I also bought myself a new Christmas jumper (sort of. I mean, it’s Frozen, which isn’t really Christmas, but I think I can wear it more easily at this time of year). The people behind “It’s Always Sunny in Philadelphia” have started doing a podcast where they chat about each show. The first series was years ago so it’s interesting to hear how they would change things, but mainly it’s reminded me of how funny it is (although it definitely gets better once Frank is in it) and have started re-watching it. 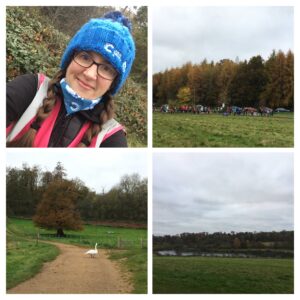 On Saturday I was marshalling at Panshanger. As it’s only a couple of miles away, I ran there. They ask for the marshals to be there at 8.15am, as it’s a one lap course so some of the points are a long way from the start. As I was the first marshal there, I got to choose, so thought I may as well go to the furthest point, at the top of the little gravel hill. It’s the highest point on the course, and I always appreciate the marshal at the top cheering everyone up, so it was nice to pay it back. It was chilly but I’d brought along a hat, gloves and buff to put on once I was stood still, and I was fine.

One thing that was a bit strange was that on the way to my spot I saw a lot of runners doing hill reps on part of the course. I thought they were warming up, but later on, just before the parkrun started, they ran past me in the opposite direction, and then again closer to when the tail walker came through. Of course it’s a public park and they were totally fine, but why would you do that and not parkrun? Particularly as two laps of the part that they ran probably equated to parkrun distance. They were perfectly friendly, and when I warned them of runners coming in the other direction they were really respectful (as were the parkrunners heading towards them) but I just find it hard to compute!

Loads of OH ladies were running there that day, so I got to cheer them on with their running and then see them at the end, as once the tail walker past I went back the way I’d come, mainly running, and so was back at the start before the event had finished. I was quite cold when I got home, but also hungry, so I had a drink before a shower (banana mylk shake from my vegan box)- I’m not normally a banana flavoured fan, but this was nice (actually flavoured with bananas) and a good thing for an energy boost when breakfast was still a bit of time away. 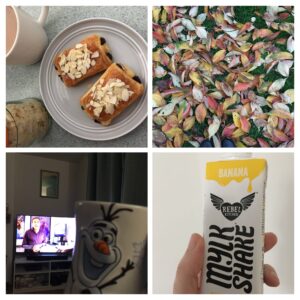 I made sort of DIY chocolate almond croissants by sticking some flaked almonds on top of vegan chocolate croissants and baking them in the oven for a few minutes- delicious.

I had a lot of work to get through, and Andy was out all day, which on the one hand was good because it meant I could get on and focus, but also not so good as I can easily spend all day doing work unless he reminds me to take a break. At one point I was doing some online training and was getting so stressed as I could not get it to print the certificate (we had to print it to prove we had spent the 1hr15 doing the training)- I was going around in circles as every time I clicked the “click here to download your certificate” it would open a new window with the same set of instructions. Argh. He texted me at that moment to remind me to take a break, and it was really perfect timing because I was about to cry (I’d had loads of paperwork to get through too and was just feeling a bit overwhelmed). In the end I saved a screenshot of it and that was enough to prove that I had completed the training so all was OK.

In the afternoon I went out on a walk, prepped some baking and then watched some of the making of Frozen 2. 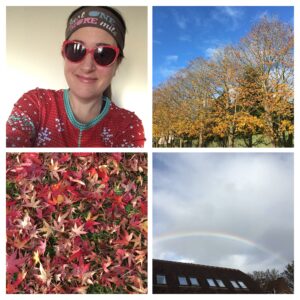 Sunday was bright but also utterly freezing! I was keen to wear my new Christmas top, but I really should have worn another layer as it was windy and the wind just sucked away any body heat. It also started off sunny but then I ran through several rain/ sleet showers, saw loads of rainbows and it really felt a bit like the 4 seasons in one day type of run.

I had prepped a babka loaf (with chocolate and biscoff) for breakfast as I have not made it for ages and really fancied something warm. Andy put it in the oven while I was in the shower and then we had it for brunch- so good. 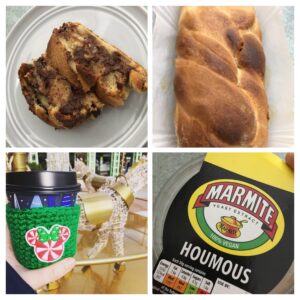 We did brave a walk as we had our vitality drinks to pick up. I had switched over to a festive cosy, and the decorations were up in town so of course I took a few pics of them too.

Also- marmite hummus- love it or hate it? I really like the combination, but I find that it is maybe a bit too strong for me? We’ve had it a few times (it’s amazing on warm bread) but it just gets a bit salty by the end.