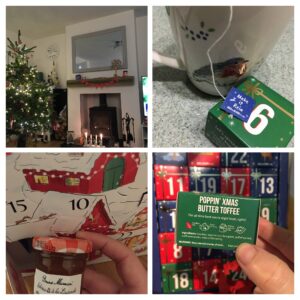 As you can see from the number on my tea advent, this post is from a while back! After the Festive Five run on the Sunday, it was another fairly normal week for me, with some morning runs and the last yoga before Christmas. 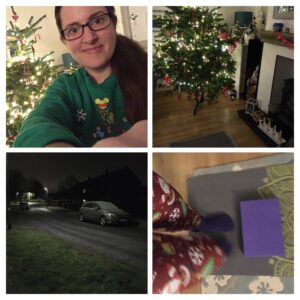 One morning was so frosty that I had to run very gingerly until I was out onto the main roads, as the pavements were super slippery and there isn’t always a grass verge.

As it was the final yoga before Christmas I opted for my Christmas leggings and my Disney Christmas sweater. Our yoga teacher put on some antlers after seeing me, but sadly they kept falling off in the class! 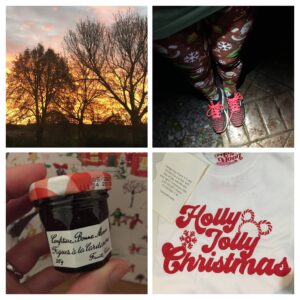 Saturday morning sunrise- the sunrise is so late now that in the week I’m driving to work before it comes up, so it’s lovely to see at the weekend.

I received my Magic Moon Club secret Santa- a Holly Jolly Christmas top and a lovely note from the secret person too. I love that the owner of the shop organises this as it spreads cheer around.

Onto the booster hunt. I’d originally booked by booster for the start of January, as I had my second one at the end of June, so this was 6 months later. However, when the government changed the rules (eg it could be 5 months after your second vaccination), earlier appointments became available, and with the number of cases at work just going up and up, I was keen to get mine as soon as possible (particularly as if you catch it, you can’t then have the booster for another month after). So I booked on for Thursday after work and Andy drove me up there. However, when I got there (past the car park marshals who checked your appointment, and past the people directing you to the building) the person on the door asked if I had an appointment (yes) and if it was 6 months since my second vaccination. Sadly, no. She then explained that the centre were not licensed to carry out the booster if it had been less than 6 months, and that they had been turning people away all day. I was not about to argue with a volunteer who had been stood outside in the cold all day, but it was frustrating to have rushed back from work (and been dreading the injection all day). They had explained that the government had changed the rules before informing the centres (and knowing how the gov have been with schools etc, I can very much sympathise with them on this). I couldn’t cancel the appointment as it had already happened (by the time I got home) but thankfully it let me book a new one. Anyway, this centre still appeared in available appointments, but I didn’t want to go back there again in case the same thing happened. There were hardly any places doing them, and none in WGC (a city…) at all, but there was a pharmacy in a nearby village, so I booked that for the Sunday evening. I rang up a couple of times to check that they would do it for me, but there was never an answer, so in the end I looked up walk in places and decided to go to one on Saturday, as there were no other walk in centres that didn’t fall in work hours for the next few weeks. 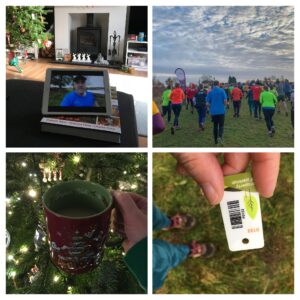 With Me Now video, parkrun start, tea by the Christmas tree and my finish token

So, I went to Jersey Farm parkrun with dad, but then drove straight home after, had a quick shower and breakfast and then went to join the queue. I thought it would be long, but I had no idea and really should have taken headphones with me. Andy had dropped me off but in the end came and stood with me in the queue to keep me company. It was freezing, and later on started raining too. In the end I queued for 2 and a half hours before getting inside. Also there was a guy in cycling shorts and a vest, and that was all. And it was freezing– no idea how he stood outside for so long. Someone had checked ID and vaccine cards at the start of the queue, but when I got inside they asked me the same question of was it 6 months since my second one. When I explained that the person at the start of the queue said it was OK (as did the NHS website) he went to check and came back and said it was OK, but I did have a mild panic at that point. Later I noticed a sign with the dates of second vaccines on it, and I was OK as I was past that.

I dread having injections (I used to be OK as a child, but then had one injection as a teen where I fainted, and since then have fainted a few times, so I always worry that it will happen again)- usually I just have to psych myself up once a year (for the flu jab) but now I’ve had 4 in a year! Anyway, it was actually OK. The guy taking my details was really friendly (he loved my surname and asked me if I was married to John Wick- the nurse doing the injection didn’t understand his banter at all!). My arm felt sore and I felt really tired, so spent the rest of the afternoon watching videos (catching up on With Me Now parkrun videos), going to bed at about 9pm.

In the morning we had arranged to meet Andy’s parents for a walk around Ellenbrook. It was lovely to walk there, and I felt OK (I felt sad for parkrun no longer being there though), so when I got home I decided to try a run. The penguin Christmas decoration this year has been in Hatfield, so I ran there to take a photo (I was going to take a photo of it after my injection as where I got the booster from was right by the penguin, but I forgot). I got a little bit lost in the town centre, and then a passer by took pity on me as I attempted to get the penguin in my selfie (I just cannot line things up at all) so she offered to take a photo of me which worked out much better. 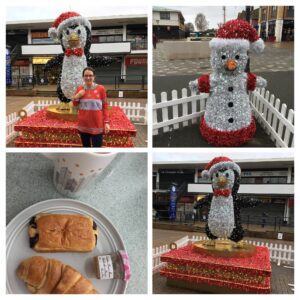 Me with the penguin, then a snowman/penguin/who knows, breakfast and the penguin again.

I ended up running nearly 8 miles which probably wasn’t the best idea seeing as how tired I’d been the day before, and I spent the rest of the afternoon feeling shattered. This feeling lasted into the next week too- it could well have been end of term tiredness too, as the end was approaching, but I am sure the booster added to it.

I was relieved to get my booster, particularly as the numbers at work went up even more the following week.

Have you had your booster yet? Do you have some nice decorations near you?

1 thought on “Christmas runs and trying to get my booster”