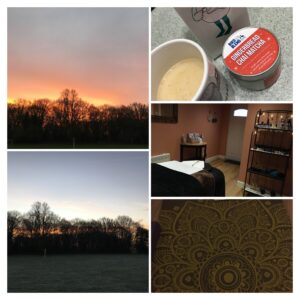 A couple of beautiful sunrises at work this week, matcha, a massage and yoga

In the lead up to the weekend, it was pretty much a standard week, with yoga on Wednesday evening, runs on Tuesday and Thursday morning (gentle due to icy pavements) and a few of the YWA throughout the week too. I am enjoying the challenge a lot this year, and I think that may be down to reducing the pressure. If I don’t finish it in the 30 days (I know I won’t as I am a long way behind) that doesn’t matter, so if I miss a day, the next day I’ll just do the video that followed the last one that I did. I think doing some yoga in the holidays helped with the actual class too, as the downward dogs weren’t such a shock to the arms! On Friday I went for a shoulder massage which was a good way to start the weekend. 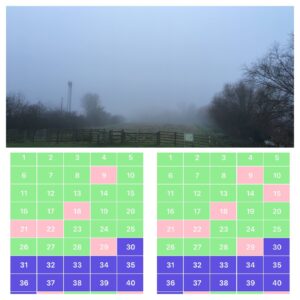 So, onto Saturday, also known as parkrunday. I was off to Henlow Bridge Lakes parkrun yet again. I really enjoyed it on my first visit (flat laps of a lake, what’s not to like) and as it was event 15, and after checking the app several times, it was definitely a number that I needed on my Wilson Index. Dad was off (to Hastings parkrun as he was away for the week) so I was on my own.  It’s around a 30 min drive from home, so I left at around 8 to give myself plenty of time. It was super foggy on the journey. I tried to park in the same place that we used on our last visit, but the car in front got the last space, but thankfully I found another place close by (there is parking at the station but I could not work out how to drive to the station from where I was). 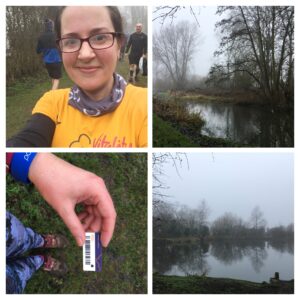 As I was there with a bit of time before the start, I walked around some of the lake and took a few photos. I found someone’s barcode on the floor and did my good deed of the day by handing it to the RD- the person looked very surprised when he called out her name in the run brief! I met a couple of lovely OH runners (Nicola and Helen) who had travelled up for some local tourism. I think I am gradually converting people over to liking the tourism side more, as we got into lots of chats about the google chrome extension for parkrun challenges (love it) and the 5k parkrunner app, which is not as good as the extension but good to use on your phone. We chatted to a few other tourists (one had been to over 200 different parkruns) and I think that inspired them too.

I thought I would aim to beat my time from the previous visit, although it was muddier than I had expected, plus I had forgotten to actually look at my time, so just ran on feel and took it sensibly through the muddiest parts. As I neared the finish the timekeeper shouted that I was on course for sub 30, and I knew that I wasn’t under 30 for my first visit, so I was pretty sure it would be a course pb, and when I got the text later on, it was confirmed. 29:35, beating 31:46 from last time. 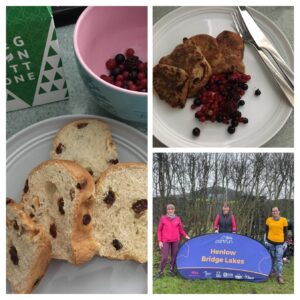 I was pretty chilly by the time I had finished, so headed straight home (the others went for a coffee in the outdoor cafe) and made myself breakfast (French toast made with the delicious Mindful Bites vegan panettone). 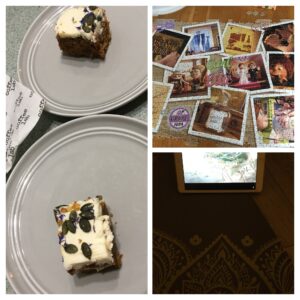 The rest of the day was spent chilling at home, doing more on the puzzle, walking into town (mainly to get our free drinks from Caffe Nero, but then seeing some amazing looking vegan cakes in a coffee shop so of course popping in to get some takeaway bits), and also some yoga.

We started watching the new series of Dexter after Andy’s brother recommended it to us. I wasn’t sure what to expect – we had watched the series when they were originally on, but I think towards the end they got a bit out of hand (and some of the characters got so annoying – I’m looking at you, Lila). Anyway, it’s been pretty good so far as it isn’t taking itself too seriously.

I listened to an entire podcast over the week too- Sweet Bobby, about a catfish. It was so interesting and also really worrying to see how these things can escalate and even people who think they are quite savvy can end up being victims. 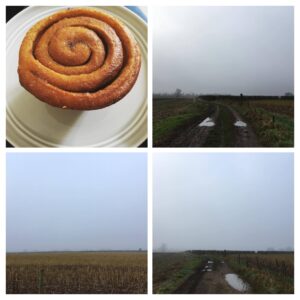 Sunday was of course runday, and as the Brighton half is now approaching (even though I feel like I only just did it, as the 2021 one was postponed until the autumn) I went out for 10 miles. I am rubbish at planning routes, but I know that Ellenbrook Fields is 5 miles from home, so I did an out and back route, over the fields. Again it was really misty when I set off (I could hardly see the trees at the edge of the fields) but by the time I was heading back it had cleared a little. I was so cold when I got home though- I think the damp air just made the cold feel worse as it was just above zero.

The coffee shop had amazing looking cinnamon buns so we had bought a couple for breakfast- heated up (plus tea) was a good way to start to warm up again after the run.

Are you training for any races at the moment?