As mentioned previously, I’m looking at the Wilson Index for my parkruns at the moment. It was stuck at 8, but then I had all the numbers from 10-20. Happily a new parkrun popped up a few months ago, and event number 9 fell at the start of half term. The perfect timing so we could head down to Southampton for the night. We only booked it the day before (hooray for daily LFT’s..) but it was so nice on Friday to have a little trip to look forward to.

We drove down after dinner, and stayed in a hotel in the city centre. Bartley Park parkrun is based in Totton, on the outskirts of Southampton, a few miles (4?) from the centre.  There isn’t parking nearby, and so I looked into running to the parkrun start, and maybe getting the train back, however Andy pointed out that the main roads didn’t always have pavements. The trains weren’t that often, so I “treated myself” and got an Uber. 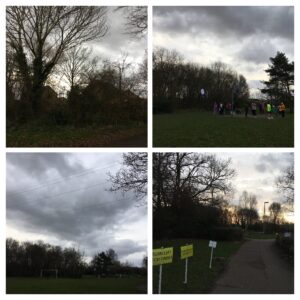 The course page directions were great, and I was dropped off in a cul-de-sac next to an alleyway that led directly to the start. Seeing those yellow parkrun signs are always good. I was there fairly early so jogged up and down some of the paths/alleyways around the park, to warm up and enjoy the sights. It’s a built up area but with lots of greenery- it reminded me a bit of Linford Wood in Milton Keynes as you start off in a built up area but mainly run through parks and along tree lined paths.

The marshals were so friendly- as soon as they saw me with my parkrun top they were directing me to the start. There was a big group of people at the new runners briefing- both new to parkrun and of course plenty of tourists.

The course map and my royal flush splits

The course was two laps, with lots of out and backs. It was clearly signed and well marshalled, but I would have no hope of doing it as a freedom run! It passed through various parks, along little paths (I call them alleyways but they are paths not on roads if that makes sense), through woods and by some houses. At some points they asked people to be quiet so that the parkrun doesn’t disturb the local residents.

They asked us to run through the muddy puddles instead of around them, to protect the grass verges. It wasn’t too bad and I was happy to do that. At one point I was running behind a guy and his child, and the child lost their shoe in the mud. I was able to bend down and pick up the shoe as I was running, and pass it back to them. I noticed he was wearing some With Me Now merch, so I gave the “Dolly or Bev” and received the “arbitrary” response. I overtook them while he was putting his shoe back on, but later they caught up with me and we had a little chat- he understood my Wilson Index chasing, and he was aiming for all the parkruns in Hampshire. 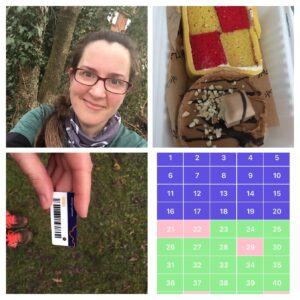 I finished in 29:09, for event number 9 (all the 9’s) and happily now my Wilson Index is at 20. I had managed to gently speed up for each mile too – probably helped with the course being fairly flat. I had to head off fairly quickly as we had to check out. We were originally going to visit Andy’s grandma, but due to various reasons that was postponed, so we ended up spending time in the city centre (although when I first got back I decided to pop to Caffe Nero to get a tea, and ended up getting very lost and running nearly 2 miles in the end…). I was keen to go to Thrive Café (a vegan café) and we picked up some treats to have at home- Battenberg cake and a biscoff doughnut.  We got some lunch and went to sit by the coast, although loads of seagulls surrounded us so we headed back away from there quite quickly!

Anyway, a lovely event and well worth a visit if you are in that area.