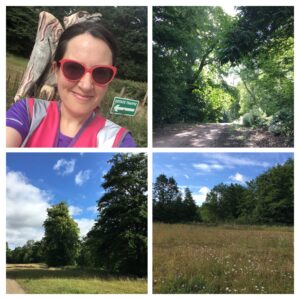 In my marshal spot, plus scenes of the park on the walk there.

At the beginning of July I marshalled at Panshanger. I always remember how much I prefer to marshal in the summer as it’s so nice to stand around in the hot weather (nicer than running?). Coincidentally I had a memory pop up from marshalling at Ellenbrook Fields- pretty much the same date and same weather. Of course being able to run to and from Panshanger is great (now that the start has moved it’s much closer) but it is just not the same. 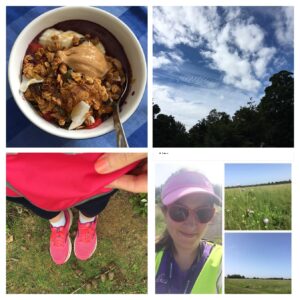 Breakfast of strawberries, granola and pb, me noticing that my nails matched the high vis and my trainers, and the EF marshal point (you can tell it’s old because the bib is yellow)

I’d ordered a new bike ages ago (April) and it finally arrived, so after breakfast I walked into town to collect it. I wasn’t brave enough to cycle home but had planned a ride on Sunday.

Sunday was busy, as I was meeting my niece and nephew at junior parkrun, plus I had a fair bit of work to do. I got up early and did a 10k run, ran the junior parkrun and then did another 3 miles on the way home. I powered through work and then decided to head out on my bike before it rained. I cycled to Panshanger to where the lovely Planted Coffee Co have their van (they are totally plant based and offer loads of gorgeous drinks and home-made goodies), and then had an iced tea. I then realised I was quite hungry as it was about 3pm and I’d not had lunch, so I bought one of their sausage rolls to have at home. 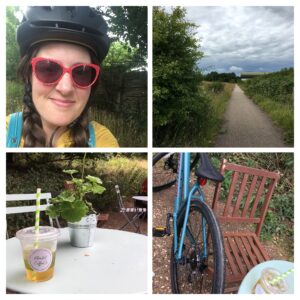 I really enjoyed the ride- it was just under 9 miles there and back which was far enough to get used to changing the gears but not so far that I was exhausted. 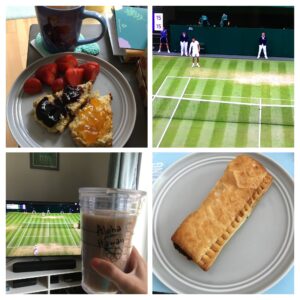 Once home I had the sausage roll and made an iced tea (I had some left over peach cobbler tea which I’d left to cool, so topped it with a little oat milk and ice) and watched Wimbledon. I knew my dad was on and managed to spot him.  Later I was still a bit hungry so made some scones to have with fruit and jam. It felt like a sort of Wimbledon snack!