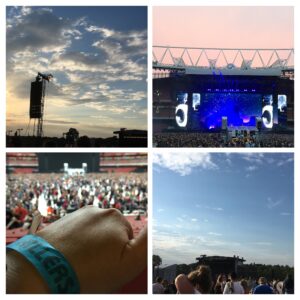 I love going to see live music, and what with one thing and another we suddenly had lots of gigs. The day we got back from France we were off to Knebworth for Liam Gallagher and Kasabian, and the next evening The Killers (which had been my birthday present from Andy in 2020- we heard one person walking in saying that it was a present from her ex and she had to get back in touch with him to get the tickets! Shows how much time has passed). I like Oasis and LG did lots of those songs, but the crowd are not “my people” (letting off flares, taking all sorts of drugs, throwing cups of beer over the crowd…). The stage was in a dip so I could not see at all- I much prefer to see a tiny person in real life rather than a big screen as it feels more real, plus I love watching all the musicians play. So it was good but not as good as the other shows we went to.

I’d not seen The Killers before and absolutely loved it. It was a proper stadium rock show, with lights, fireworks, lasers, confetti, different videos on the big screens for each song, and just such an uplifting feeling. Whereas with LG there was that “attitude”, Brandon Flowers (lead singer) just seemed to love being there. At one point they got someone out of the crowd to drum for them- yes this happened at each of their shows but it was exciting to see. 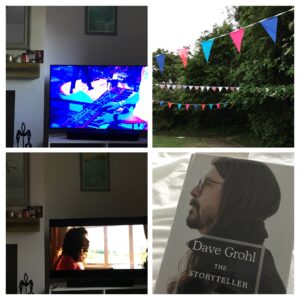 Later on we went to see Queen with Adam Lambert (another meant-to-be-in-2020 gig), which was brilliant- I loved all the outfit changes and the fact that everyone in the audience was just so full of joy. Finally we had an evening at Hyde Park to see Elton John- a slight tone shift from the other shows but still so impressive. Although this was the day of our school trip so I was slightly shattered and had to sit on the grass for several songs because I just did not have the energy to even stand.

After all the shows, it was fab to see Glastonbury on the TV and to enjoy seeing various bands- Wolf Alice were a particular highlight and reminded me of when we saw them at Latitude last year. Watching Bohemian Rhapsody was great to see all the songs, and I still need to watch Rocketman again after seeing Elton John.

Another June highlight was an in-person yoga class! Often we have had a special one on the summer solstice, and this year we could use the little community centre garden. The weather was perfect and we managed to spend the entire class outside, including a 30 minute meditation at the end. The garden was decorated with bunting, we had candles everywhere (keep those midgies away) and it was so good to meet in person rather than on Zoom. Although the bonus with zoom is that there is no need to drive home after! 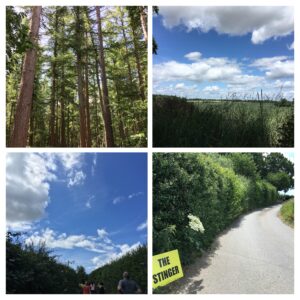 Yes they had a hill called The Stinger- just when you thought all the hills were done, this was around 8 or 9k in and around the bend there was more hill!

Finally I did an actual race! I was hoping to do one of the Ware Ten races (10k or 10 miles) but it was the same day as the Grand Prix which Andy had tickets to, so he was already using the car. A few weeks ago I was given a leaflet at parkrun for the Welwyn 10k, in the village close to here, so I decided to sign up. I knew it was hilly, but didn’t actually know how hard it would be. Lovely scenery, and at one point I could see about 15 red kites all circling above the road, but so hilly. It didn’t start until 11am so I ran there first (4 miles) but it was super warm by the time we started running. I walked a couple of the hills but I was doing it to enjoy it and not to worry about the time. 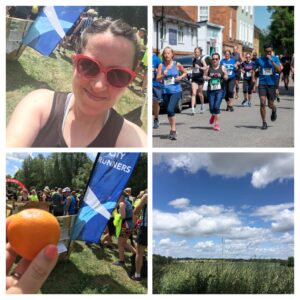 The best bit? When you finished you could help yourself to fruit (bananas, apples or satsumas)- a juicy satsuma/ orange is just what I fancy when I finish running in the heat- perfect.

I got Andy to pick me up as I didn’t fancy another 4 miles (plus we had jobs to do like going to the library so we did those on the way back).

The main negative of June was Andy getting covid. Thankfully he was just really unwell for one day, and then not too bad after, but in a bid to try and not catch it I slept on the sofa and we kept as separate as possible (I’d make tea, bring it up and leave it on the landing and he’d come out of his office to get it).  I did manage to steer clear of it so I suppose it was worth the week of hardly any sleep?