We’ve not had a new parkrun in Herts for ages, and there was much excitement when Leavesden popped up a few weeks ago.

I would of course be travelling there with Dad. We were in no rush to head to the first one, and anyway had plans (his 250th venue had already been chosen) so we were there for event 4 in November.

Listened to With Me Now in the week I heard that Danny, the presenter, would be heading there, which also meant lots of listeners were heading there too. We’d already arranged it so it was a happy coincidence and of course I had to wear my WMN cooldown hoodie. 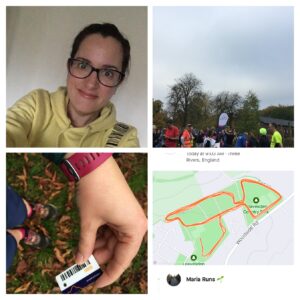 I had seen a few posts on their facebook page regarding parking, and chose the main car park as the postcode for the satnav, but it turned out to be OK and not too busy when we arrived at 8:30. I think by then the tourists had died down a bit, meaning they didn’t have such huge numbers as in their first few weeks.

The starting field was full of With Me Now merch, and I got to say hi in real life to a few running insta friends (Hi Branka and Holly) which was lovely.  The venue has everything you could need- parking on site, a lovely looking cafe (plus toilets), a playground and lots of interesting sculptures linking back to the history of the park in aviation.

The course was three laps, going around playing fields and then through woods. There is one narrow part where you meet runners in the other direction (almost like the middle part of a figure of eight) so you were asked to not overtake in this section, but it was only a few metres long so it’s easy to wait until after if you were in that position. It isn’t flat, but not hilly either, just a bit undulating. I think trail shoes might be better in winter but at that time the ground was fairly firm and the muddiest part was the field in the start/finish area. I don’t always like lapped routes, but as each lap was varied I really enjoyed it and was quite surprised as we came into the finish.

At the finish, Danny was chatting to someone else about lovely Ellenbrook Fields, so we joined in with the chatting and I asked for a photo. Last time I met him (at Kingdom parkrun) I chatted to him but felt a bit awkward asking for a photo, and regretted that as he always says on the pod that he’s happy for photos. Of course, I am not looking at the camera in the photo, but at least my eyes are open! 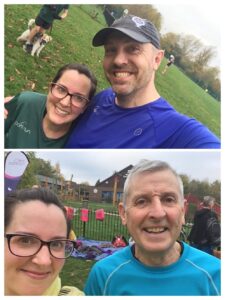 Of course I got a picture with Dad too, to commemorate our visit and to celebrate Queen of Herts once again!

That was my 90th different parkrun venue- gradually chasing down the Cowell!

How many parkrun events have you been to? Does your region have any good names? I quite like Champshire for completing all the parkruns in Hampshire!