On Saturday morning I was off to run at Ellenbrook Fields- after getting the email about them being short of volunteers I’d offered to sort the tokens after as I was going to be on my own (eg not heading back to my parents for breakfast) and we weren’t heading into London until later so I knew I’d have the time. 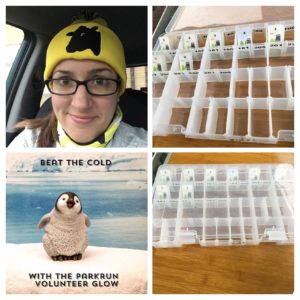 Plus, who can resist a penguin? My cow cowl bobble hat arrived on Friday so I decided to take it with me as it was cold and rainy and I knew I’d cool down as soon as I stopped running. The only other time I have sorted tokens was at Panshanger on a frosty morning- I feel like the people who get to do it in a cafe (or in the summer) have a much nicer job! Anyway, the parkrun was enjoyable (28:24- too slow for a bingo number as I need 17 and 18) and then put on my coat and hat and started to sort the tokens. Luckily now EF have a little tool box so the scanners had been putting them in the correct box (sets of 20) so I just had to sort each section. None were missing (excellent work EF runners at returning them all) but it got a bit windy and at one point the set I was sorting blew all over the table- argh! The RD decided not to put them on the knitting needle things as she said she needed to take them home to dry them out so they wouldn’t be sticking together next week, but I still felt very satisfied when the box was full and all the sections were properly ordered. I was just pretty cold, and I was going to treat myself to a hot drink from the coffee van, but the coffee van didn’t turn up.

Once we had finished I helped pack away (I say helped, one job was to take down the gazebo and I am not very spatially aware so I just could not work out the way it would fold- thankfully there were 4 competent people who could manage that while I carried the bag…) and then headed back to the car. I stopped at Tesco on my way home as I wanted to get some marzipan and icing for the Christmas cakes (they have been maturing away for a few weeks now) but the shop was a total nightmare, rammed full of people and awful stuff like Slade blasting out- urgh. I was glad to finally get home and have a hot shower and breakfast. I pottered around at home a bit, and thankfully the rain eased off before we had to leave for London. 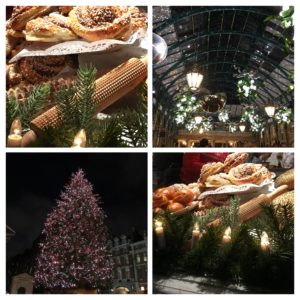 We drove to St Albans and got the train in and had a lovely wander around Covent Garden to see the Christmas lights. We went to get a fancy Christmas hot chocolate in Hotel Chocolat but I was a bit disappointed as we usually get one with the coconut milk, and automatically they never seem to add the cream (not a fan of the weird squirty cream) but this time it came with a huge pile of brown cream (chocolate cream? is that a thing?)- we had to spoon it off and then there wasn’t much actual hot chocolate left. Next time I shall specify no cream! We also went to the amazing Swedish bakery and picked up a couple of cinnamon buns to have for breakfast (seriously, just standing outside of the bakery means you get the most amazing smells wafting out- it reminds me of the book A Year Of Living Danishly because I mainly  wanted to eat cinnamon rolls while I read it!). After a quick dinner in Leon (their vegan falafal Christmas wrap is so tasty) we got the tube to Kew Gardens. 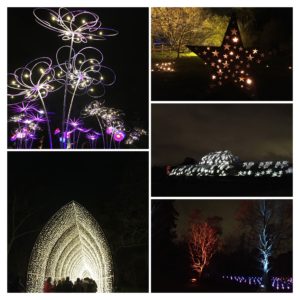 I’ve not been before and I was really impressed. Within the gardens was a mile trail with all sorts of light installations along the way. Some had music, some moved, some made of fire, and some floating on water. It was all varied and felt so festive. 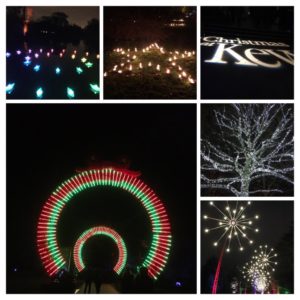 There were lots of food stalls, so Andy got a mulled wine and I got a hot apple juice with cinnamon, and we walked around admiring the lights. At one point we had to cross a bridge and there was a bit of a traffic jam there, but not for long.

We were probably there for around 90 minutes in the end, just wandering and taking our time. I liked that it was one route, so you had no worries about missing any of it.

One of the places was playing Silent Night (sung in German) which my Grandad had tried to teach me when I was little (my Grandma was Austrian) so I had a little time in the dark remembering my Grandad. It made me think of my Nan too, as when she came to stay with us at Christmas we used to make sure we drove past certain houses as they always had crazy Christmas lights and she loved to see them all.

I must have been shattered as on the Sunday I didn’t wake up until nearly 10 o’clock! I cannot remember the last time I slept that long. I had to head out quickly on a run as my cousin was coming over later and we needed to pop to town (I had to return a jumper and get something for dinner), so I only did 5 miles.

After racing into town and ticking things off the list we were home just in time for my cousin, his wife and their baby to come over. We’d not seen them for ages (since before their baby was born- they’d popped over after a hospital appointment as we are close to the hospital) so it was good to catch up.  After they left it was time for a bit of life admin and then catching up on TV. 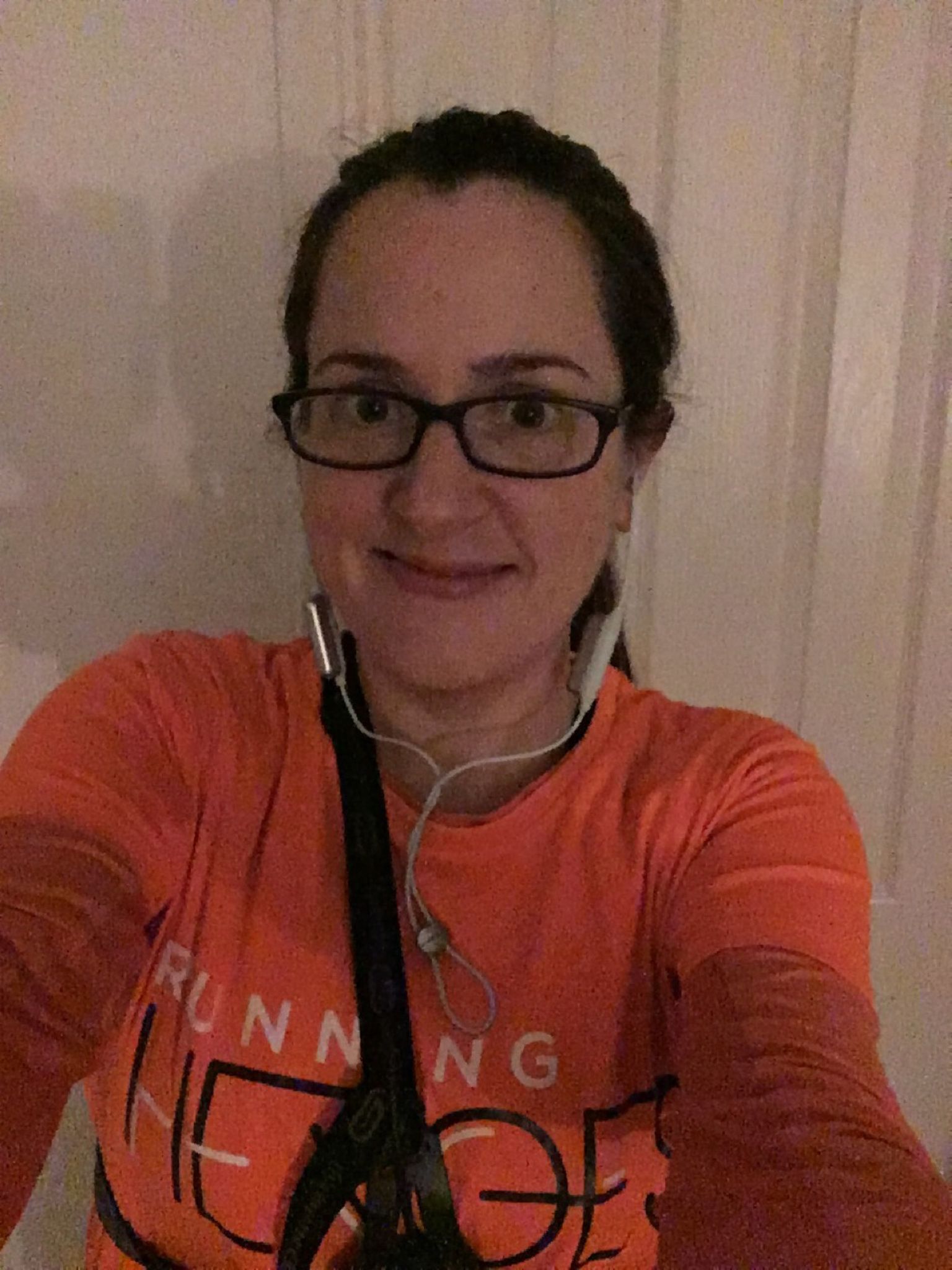 On Monday after work I went on a run (my regular 3 mile route)- I saw loads of Christmas lights up, but seeing as it is actually December I think it’s OK. Some are rather interesting (giant inflatable Santa and snowman anyone?).   I wore my new Running Heroes t-shirt. A couple of weeks ago I had an email saying that because I’d filled in a questionnaire (which I don’t remember doing) I had won a t-shirt. It’s lovely and soft, and that bright orange colour is good for winter, although of course I had my light on too. My back had been feeling a little stiff so I ran very gently as I didn’t want to make it worse, and I think it helped. I had chosen to run on Monday rather than Tuesday because I had a training session after work over in Watford which didn’t finish until 6pm and I knew the traffic would be a nightmare getting home, as it’s in the wrong direction. I wouldn’t usually run for 3 days in a row as the third run tends to be a bit of a slog for me by that time, although doing  shorter run on the Sunday meant it was actually fine.

On Wednesday I had a late meeting, so didn’t have time for my usual walk before yoga. It was our last yoga session because our teacher is off to India for a month (normally they run during term time so we’d have a couple more weeks).  It was a really small class, and had that end of term feel. We ended up going off piste, as a few people mentioned tight shoulders. A few weeks ago we did a little partner yoga to stretch out the shoulders, and so we ended up doing loads of it- things like child’s pose with someone laying on top (maybe called turtle?), lots of paired downward dogs (where the other person puts their feet on your hips to push down further)- I was really pleased because I’ve never managed to be the person balancing on top before, but with a little help (someone else helped to place one of my feet) I managed to hold the pose. I just need more confidence because I tend to think my arms aren’t strong enough and then panic (to be fair last time I tried I fell over and bruised myself quite badly). We then did some laughter yoga, which felt strange at first but it did leave you with a sort of feeling of release. The final relaxation was very much needed.

On Thursday I had to get to another meeting after work, and although it didn’t finish as late as I thought, the traffic was really bad. I did the regular 3 mile route and it started to rain just as I got into my road so I decided that was enough! With lots on at work it’s good to just get a little bit of fresh air.

Have you been to London to see the lights? Do you have nice Christmas lights near you? Have you ever been to a light show? I quite liked the Lumiere festival in London last year.