As has been the routine since it’s been allowed, last Saturday I went to my parents for a run with my dad and brother, before having breakfast in their garden. It was fairly warm, and we got to chatting about what we will be doing in October for this sort of thing. (I think technically I could go inside my parents house now, but we would rather be safer and stay in the garden)- I am thinking of bringing along some porridge in a thermos cup to have, plus many many layers! 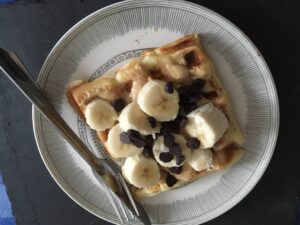 We had waffles with hummus and avocado for dinner. The batch usually makes 4 waffles, and we usually have 2 each with the savoury toppings, but this week decided to have one savoury and then one sweet to properly recreate the Norwich Waffle House experience (where you can get 2 half portions for main and dessert – the St Albans one just does normal sized ones and there is no space for dessert if you had one for your main!). I topped mine with maple butter, chocolate chips and banana. Very tasty. 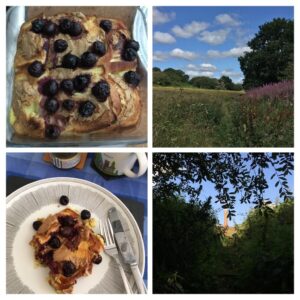 On Sunday we had decided to have another walk- this time more like 8 miles as opposed to the nearly 14 miles of last Sunday. I had prepped baked French toast the night before so we had a leisurely breakfast before heading off. 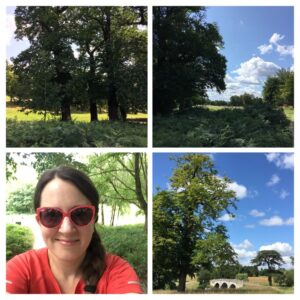 This time the weather was perfect- sunny but fairly cool, and no downpours either. 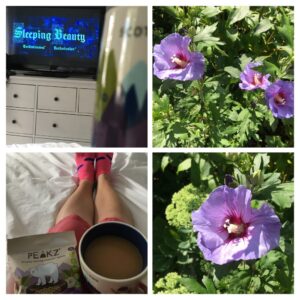 Once home we had time (and energy) for a bit of gardening and then Andy watched the Grand Prix while I watched some more classic Disney.

I had not watched Sleeping Beauty since I was little, and I had a weird flashback to the fear I felt when I saw the magic puffs going out of the chimney of the cottage. It was strange because when I think about the film, I just think about the bits that are a bit annoying (eg her needing to be rescued/ typical princess things), and the three fairies and all of her woodland animal friends, whereas when I was actually watching it, that was suddenly what I remembered.  It doesn’t top the Disney classics of Little Mermaid, Aladdin or Lion King for the catchy songs and humour. 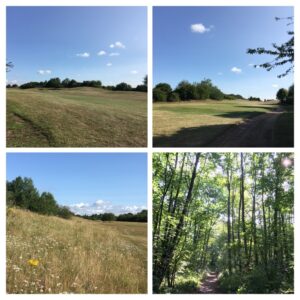 As I didn’t run on Sunday, I went out on Monday morning instead (the joys of the holidays). I finished up going through a golf course and the woods- I saw both types of woodpeckers (at different points) which was exciting, and apt as I was listening to Marathon Talk where Tony was talking about spotting an eagle on his run. 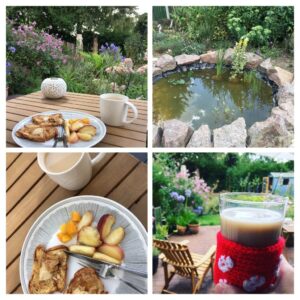 As I had some bread left over I used the vegan French toast recipe from the Fearne Cotton book, and it worked out so well (basically you use a little chickpea flour to thicken the milk)- along with some peaches and mango it was very summery. This powered me through several hours of gardening (I dug up more grass from around the pond, added more stones to the edge of the pond, planted out some lavender plants grown from seed and varnished the signs for the garden at work).

Often in the afternoon we  make a pot of tea, and if there has been any left I’ve been putting it in a glass and leaving it in the fridge to cool- then the next day adding a bit of milk to make my own iced tea latte. A London Fog is my favourite tea drink from Canada – it’s basically a latte made with Earl Grey tea and vanilla added to the milk- so I made an iced one using Earl Grey tea, but any tea will do. Bird & Blend’s Peach Cobbler tea makes a nice one too.

What are your favourite classic Disney movies? Any that you are not so keen on?

2 thoughts on “A new routine for the weekend, waffles and French toast”